Stanford at Washington: 3 things to watch

Stanford travels to Seattle on Thursday night for a Pac-12 clash with Washington at CenturyLink Field.

The Cardinal and the Huskies are both coming off of bye weeks, so both teams have had extra time to prepare. Of course, Stanford already has a signature win over USC, while Washington fell in its showcase game against LSU.

Stanford has dominated Washington since Steve Sarkisian became head coach in 2009. Can the Huskies stop the bleeding this time around?

Let's take a look at three things to watch in the clash between the Cardinal and the Huskies on Thursday evening. 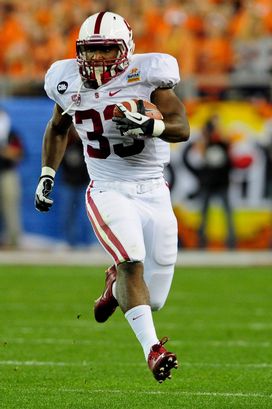 US PRESSWIREStanford's offense is centered around Stepfan Taylor and the ground game.

1. Cardinal offensive line vs. Huskies defensive front: Stanford has perfected the formula of stout defense + strong run game = victory. And Washington has been on the receiving end of this equation the last three seasons, with the Cardinal rushing for an average of nearly 350 yards per game against Sarkisian's bunch, including 446 last season. Under first-year coordinator Justin Wilcox, UW hopes that it has solved those issues against the run. But against LSU, the Huskies allowed 274 yards and four touchdowns on 52 carries, and the front seven was just overmatched throughout the game. Stanford will look to establish star running back Stepfan Taylor and Co. early, hoping to put first-year starting quarterback Josh Nunes in manageable third-down situations.

2. Cardinal defense vs. Huskies QB Keith Price: The Cardinal defense will offer a real challenge for a Washington offensive line that is wounded after losing four of five starters since fall camp. Stanford leads the country in rush defense, allowing just over 41 rushing yards per game. The ground game was already a bit of a concern for the Huskies coming into the year, and they managed just 28 yards on 24 rushing attempts against LSU. If quarterback Keith Price has to carry the load offensively, it could be a long night for Sarkisian's squad. And Price may also find himself on the run a lot, as Washington allows over 2.5 sacks per game. Stanford defensive end Ben Gardner has five tackles for loss and two sacks this fall, so he will look to take advantage of a young Huskies O-Line. Price will want to get the football out of his hands quickly and find his top playmakers like Kasen Williams, who has 15 receptions for 163 yards and two scores this fall.

3. Will Nunes have to make plays?: So far this season, Cardinal quarterback Josh Nunes has been able to rely on a strong run game to help carry the offensive load. And that's what they were able to do in four straight wins against the Huskies in recent years. If the ground game is rolling Thursday night, Nunes will be able to rely on rather safe passes, especially on third down. But if the Huskies load up and stop the run, will Nunes be able to make plays on third-and-long? Third-down conversions has been an area of weakness for Stanford thus far, and Nunes will be making his first career road start. Plus, the environment will be raucous for the road team.