Stanford kicked off spring practice on Monday, and second-year head coach David Shaw will be looking to see how his Cardinal progress over 15 practice sessions without star quarterback Andrew Luck, who is moving onto the NFL.

Let's take a look at some of the position battles to watch and other key storylines during Stanford's early preparation for the 2012 season. 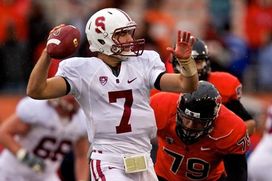 The Andrew Luck era has ended on The Farm, so it will be a major adjustment for Cardinal fans not seeing the prolific quarterback line up under center. The junior-to-be Nottingham and rising senior Nunes have the prep credentials at least on paper to fill in nicely, but neither one will possess the command of the offense like Luck, who was one of the rare college quarterbacks to call his team's offensive plays at times. Nottingham was the backup last season, so the strong-armed, athletic, pro-style signal-caller is the odds-on favorite to win the job, though the competition will likely last at least until fall camp arrives. Nunes also has the big, pro-style body, so it will come down to whoever has best control of the playbook. Evan Crower, Kevin Hogan and Robbie Picazo have a lot of work to do to become legitimate threats in what's looking like a two-man race.

Luck was the best player on the Cardinal the last few seasons, but he's likely to be joined in the first round of April's NFL Draft by stud offensive linemen David DeCastro and Jonathan Martin. The physical downhill run game that was so successful the last few seasons was fueled by those two players and the rest of the O-Line, so replacing those two stars will be difficult. The ground game will remain a major aspect of this offense with Stepfan Taylor, Anthony Wilkerson and Tyler Gaffney. The question is whether the star-studded 2012 offensive line class will be able to make an immediate impact when some of those players arrive in the fall. In the meantime, last year's backups will try to snag the available spots with strong springs.

Wide Receiver Ty Montgomery, who became the team's best deep threat last season and who will be critical for the Cardinal in their vertical passing game. It's amazing how much success Luck had the last few seasons relying on tight ends and receivers who weren't always able to separate and get down the field consistently. The tight end combo of Zach Ertz and Levine Toilolo are back, but more playmakers need to emerge.

The coaching staff still needs to be completed after co-DC Jason Tarver left for the NFL's Oakland Raiders. Tarver helped lead a defense that finished the season ranked either first or second in the Pac-12 in eight categories in 2011, including first in total defense and rushing defense. Shaw now needs to replace three coaches on staff after special teams coach and recruiting coordinator Brian Polian departed for Texas A&M and defensive assistant Chester McGlockton passed away. Former co-DC Derek Mason will assume the lead role calling defensive plays as well as remain associate head coach and continue to work with the team's secondary personnel.