Notre Dame passed its biggest test of the season Saturday night in Norman as Brian Kelly's squad scored a decisive 30-13 win over Oklahoma to remain undefeated.

The Fighting Irish run defense held the Sooners to 15 yards on 24 carries, and Manti Te'o bolstered his Heisman Trophy candidacy with a late interception. 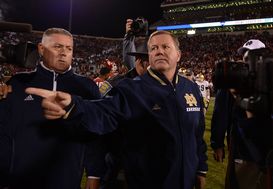 US PRESSWIREBrian Kelly has Notre Dame undefeated and in midst of a breakthrough season.

Notre Dame now sits at 8-0 with just four games remaining: home against Pittsburgh, at Boston College, home against Wake Forest and at USC. While crazy things happen every week in college football, it's not a stretch to think that the Irish will enter the game against the Trojans unbeaten. And the way that 'SC has played this season and the way the Irish played against a pass-happy Sooners squad, a 12-0 mark at the end of the regular season doesn't look too far-fetched for ND.

Who would have predicted that in the preseason?

And a 12-0 mark, no matter if Oregon or Kansas State remains unbeaten, will get the Irish a date in Miami for the BCS title game. The computers already love the Irish, and the human pollsters will certainly now give more praise to Kelly's squad after the win Saturday night.

Meanwhile, Alabama kept rolling this weekend with a 38-7 victory over previously unbeaten Mississippi State in Tuscaloosa. And while the Crimson Tide still have a road test at LSU and a hypothetical SEC title game remaining, it's hard to see any team beating Nick Saban's squad right now. The Tide can both run and pass efficiently, the defense is flat-out dominant and the special teams are solid.

If the BCS title game matches up the Irish and Tide, it would arguably be the most highly anticipated title game of the BCS era.

And if Oregon and Kansas State remain undefeated, it would be BCS armageddon because the Tide and Irish are likely to sit at Nos. 1 and 2 in the final BCS standings if they finish unbeaten.