Monday was college football's most sacred day of the year, at least until LSU and Alabama battle for the crystal football in New Orleans in the BCS national championship game.

Let's take a look back at the standout performers who made the most impact in their bowl games yesterday.

QB Case Keenum, Houston: Because of the explosive offensive performances in the Rose and Fiesta Bowls later in the day, many may have overlooked Keenum's absurd standout showing by the time they went to bed last night. But there's no denying the sixth-year senior's record-setting day in Houston's TicketCity romp over Penn State. The Cougars quarterback completed 45 of 69 passes for 532 yards and three touchdowns with no interceptions against a team that ranked fourth nationally against the pass. His 45 completions and 69 attempts were the most by a Penn State bowl opponent, and he attempted 29 passes in the first quarter alone. He couldn't have ended his college career on a higher note. 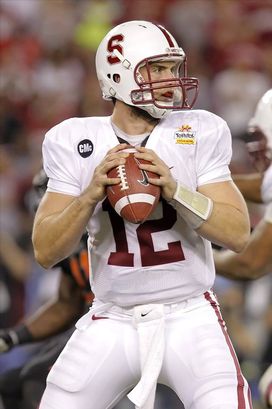 ICONAndrew Luck did everything he could to deliver Stanford a win over Oklahoma State.

QB Andrew Luck, Stanford: Why did Cardinal head coach David Shaw essentially take the game out of his Heisman finalist's hands late when they were setting up for a field goal? I understand they needed just three points to win it, but Luck has been the best player in college football the last two seasons and showed why on Monday night against Oklahoma State in the Fiesta Bowl. He went 27 of 31 for 344 yards and 2 touchdowns, and he showed once again that he is at his best in the two-minute drill. I would have been more aggressive calling the plays considering that Luck was playing his best game of the year.

RB Stepfan Taylor, Stanford: The Cardinal has depth in the backfield, but Taylor proved once again why he receives the bulk of the carries. He finished with 35 rushes for 177 yards and two touchdowns, showed his ability as a pass-catcher and created his own holes. The junior runs with power and speed, and he's an aspect of this offense that sometimes gets overlooked because of Luck.

WR Justin Blackmon, Oklahoma State: Quarterback Brandon Weeden was good, completing 29 of 42 passes for 399 yards and 3 touchdowns. But he wouldn't have been as successful without his stud receiver Blackmon, who caught eight passes for 186 yards and three touchdowns. He was the most dynamic player in this game, and he likely vaulted up NFL draft boards (if he wasn't high enough already) with this performance.

WR Lavasier Tuinei, Oregon: The Ducks lost a lot when Jeff Maehl's eligibility ran out after last season, specifically a go-to receiver. But the senior Tuinei stepped up in a big way against Wisconsin in the Rose Bowl, grabbing a season-high eight receptions for 158 yards and two touchdowns to earn offensive MVP honors. In his entire career he never had a 100-yard receiving game, and his last outing with as many catches came in the opener against LSU. He was Darron Thomas' favorite target against the Badgers, saving his best performance for his final collegiate game after not having a standout season. He was clutch all game long and was a big reason the Ducks were able to come out on top.

RB De'Anthony Thomas, Oregon: The Pac-12 freshman of the year was so good and is so fast that he actually managed to make teammate LaMichael James look slow. Thomas had just two carries against the Badgers, but they resulted in touchdown runs of 91 and 64 yards (the 91-yarder was the longest score in Rose Bowl history), giving him an average of 77.5 yards per carry. As a team the Ducks had 345 yards on the ground, averaging 8.6 yards per carry. He's an electric athlete who will be a part of this offense for at least the next two seasons, and his impact on the ground, in the passing game and on special teams is undeniable. He arguably could compete with USC quarterback Matt Barkley for West Coast Heisman votes next season.

Special mention goes to Oregon linebacker Kiko Alonso, who put aside his off-the-field issues to earn defensive MVP honors with 1.5 sacks, a big interception late in the third quarter and five tackles. 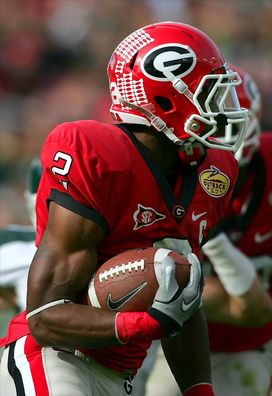 CB Brandon Boykin, Georgia: The senior ended his college career by earning MVP honors in the Outback Bowl against Michigan State. In the three-overtime loss, Boykin accounted for 183 all-purpose yards, including his 92-yard punt return for a touchdown to set a Georgia bowl record, topping Charlie Trippi's 68-yarder in the 1945 Oil Bowl. He also caught a 13-yard touchdown pass and tackled Spartans receiver Keshawn Martin in the end zone for a safety on Michigan State's first play from scrimmage.

Honorable mention goes to Georgia receiver Tavarres King, who caught an 80-yard touchdown pass for the longest play in the game's 26-year existence. It was also a career-long reception for King, whose 205 receiving yards were a Georgia school record.

Defense, South Carolina: It was a complete effort from the Gamecocks on defense, as the unit helped the program stop its three-game losing streak in bowl games with a victory against Nebraska in the Capital One Bowl. The Gamecocks held Nebraska scoreless the last three quarters after the Cornhuskers scored 13 points in the first period, and they held the Cornhuskers to minus-15 yards in the fourth quarter to prevent any type of a comeback. They sacked dual-threat quarterback Taylor Martinez six times, four of which came in the final frame. It was a complete effort from Steve Spurrier's squad, as quarterback Connor Shaw played turnover-free ball, completing 11 of 17 passes for 230 yards and two touchdowns. He also rushed for 42 yards and a score.

RB Chris Rainey, Florida: The Gators all-purpose performer was at it again in the Gator Bowl victory over Ohio State, once again blocking a punt to set up a score to extend the team's lead to 21-10. Rainey also had 71 yards on the ground, 31 receiving yards and 31 return yards. His all-around play was huge, especially in a game that featured two anemic offenses.