Oklahoma head coach Bob Stoops told the Tulsa World on Saturday that a report earlier in the day stating that he was in negotiations to become the next head football coach at Florida is “Not true, whatsoever.” 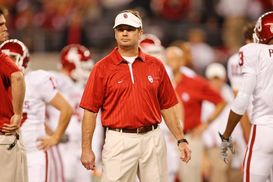 ICONBob Stoops has denied that he is close to a deal with Florida.

The newspaper contacted Stoops via text and the former Florida defensive coordinator replied, “I’m out recruiting as we text.”

GatorCountry.com, a website that covers Florida athletics, reported earlier Saturday that multiple sources had confirmed Stoops was “finalizing a contract to become Florida’s next coach.”