The 2012-13 college football postseason continues Wednesday night as Florida and Louisville collide in the Sugar Bowl.

Let's take a look at some of the most important aspects of this matchup between the Gators and the Cardinals. 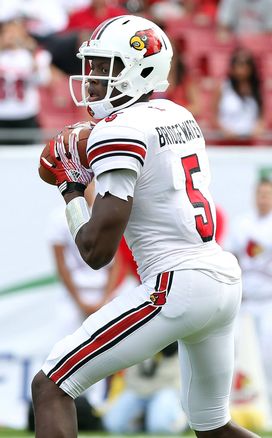 US PRESSWIRETeddy Bridgewater has thrown for nearly 3,500 yards and 25 scores against just seven interceptions this season.

• Banged-up Bridgewater: The health of Teddy Bridgewater is the biggest question mark for Louisville. In the Big East regular-season finale against Rutgers, he clearly wasn’t 100 percent due to an ankle sprain and a broken wrist. But he essentially willed the Cardinals to victory despite being hampered. For a sophomore, he possesses great poise and goes through his progressions quickly. And he clearly can make every throw necessary to compete at the highest level. The one thing that strikes me about this offense is the way he spreads the football around to his teammates. Five different Cardinal skill-position players have 30 or more catches on the year, led by big-play threat DeVante Parker, which helped Bridgewater finish the regular season with nearly 3,500 yards passing and 25 scores against just seven interceptions. He should be improved physically because of the long layoff, and a big effort in a showcase game could put him on a lot of preseason Heisman Watch lists for next year along with Jadeveon Clowney.

• The Cardinal's O-Line concerns: The other major concern for the Cardinals besides the health of Bridgewater is the play of the team’s offensive line. Charlie Strong’s group has struggled throughout the season to pick up the blitz — and that’s a disastrous attribute when facing a team led by Will Muschamp, who can dial up the blitz with the best of them. The Gators’ zone blitzes really threw Tennessee quarterback Tyler Bray off of his game earlier this season, as he didn’t know where the pressure was coming from all game long. Bridgewater may not stand much of a chance even if he is healthy if the Cardinals’ O-Line doesn’t have its best game of the season.

• Too much physicality: We know about the Gators' dominant defense, both against the run and the pass. And as mentioned above, Muschamp's defense should give the Cardinals' offensive line problems. But on the other side of the ball, Louisville's defensive line has a tough challenge going up against a Florida offensive line that surprised me with just how physical it had become over the offseason. That was the one area of concern for Muschamp since last season, as he wanted his team to become tougher overall. And running back Mike Gillislee benefitted from improved play up front as well as being given an opportunity to start. He should find plenty of running room against a defense that is not great at stopping the run. Gillislee, as well as dual-threat quarterback Jeff Driskel, will be the focal point of an offense that will want to pound the ball against a unit that allows over 150 yards per game on the ground.

• Intangibles: If Louisville can keep the game close, Bridgewater has led five fourth-quarter drives that have tied the game or given the Cardinals the lead. But to stay in the game, Louisville needs to sustain some drives and keep its defense off of the field. Meanwhile, motivation will be a factor for the Gators. They are obviously disappointed that they are not playing for the BCS national title, so it'll be interesting to see if they come out with the mindset of stepping on the Cardinals' throats or if they come out sloppy and uninterested.