The 2011-12 bowl season continues Tuesday night with the Sugar Bowl between Michigan and Virginia Tech in New Orleans.

The Wolverines are looking to put on a better showing than their embarrassing 52-14 loss to Mississippi State in last year's Gator Bowl, while the Hokies have the third-longest bowl steak in the nation at 19 straight postseason appearances. Hokies head coach Frank Beamer is just 8-10 in bowl games, with a 1-4 record in BCS bowl games, including last year’s blowout loss to Stanford in the Orange Bowl. This will be the first meeting between the programs.

The Wolverines landed back on the national map in Brady Hoke's first season as head coach, and the biggest reason the program landed a spot in a BCS bowl game is because of its much-improved defense in Greg Mattison's first season as coordinator. The Wolverines rank 18th in the nation in total defense, giving up less than 320 yards per game, and they're allowing less than 18 points per contest, good for a seventh overall national ranking. Last season in Greg Robinson's last season as coordinator, this unit gave up nearly 450 yards and 34 points per game. Frankly, the porous defense cost Rich Rodriguez his job. 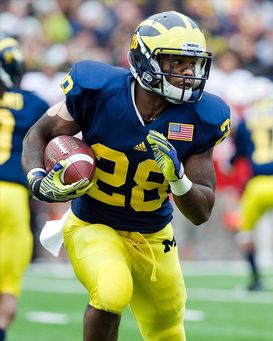 ICONFitzgerald Toussaint emerged as Michigan's lead back in the second half of the season.

The other main factor in the Wolverines' resurgence has been their improved run game. Fitzgerald Toussaint emerged as the No. 1 running back, as the sophomore became the first Wolverines back to rush for 1,000 yards or more in a season since Mike Hart in 2007. In his last five games alone, Toussaint has rushed for 678 yards. Overall, Michigan ranks No. 12 on the ground, averaging more than 235 yards per game. And because the team found a true No. 1 running back, dual-threat quarterback Denard Robinson has not needed to carry so much of the offensive load.

But "Shoelace" can still take over a game when necessary, and he's coming off of the best two games of the 2011 season -- big wins against Nebraska and Ohio State. While he still has a tendency to get banged-up and chuck footballs up for grabs down the field, he played well against the Cornhuskers and Buckeyes to close the season and could be poised to take advantage of a Virginia Tech defense that struggled to contain Clemson dual-threat quarterback Tajh Boyd. Bud Foster's defense will pressure Robinson, but he has the wheels to avoid the rush and make plays.

Meanwhile, Virginia Tech is paced on offense by running back David Wilson, who inexplicably never received much Heisman play despite rushing for 1,627 yards and nine scores this season. He'll be going up against a Michigan defense whose strength is defending the run, though it's by no means dominant against a sound rushing attack. However, the line has been central to Michigan's stellar defensive season, led by seniors Ryan Van Bergen and Mike Martin. If Virginia Tech can move the ball with Wilson, it will open things up for quarterback Logan Thomas to be able to make plays down the field with his deep receiving corps. The dual-threat signal-caller, who has rushed for over 400 yards and 10 touchdowns on the ground, has completed almost 60 percent of his passes for 2,799 yards and 19 touchdowns against nine interceptions. He became more comfortable in the offense as the season progressed, finding Jarrett Boykin (57 catches), Danny Coale (787 receiving yards) and Marcus Davis (five touchdowns) down the field.

Keep an eye on: Kyle Fuller. Jayron Hosley is the Hokies' top NFL prospect, as the cornerback has recorded 12 interceptions over the last two seasons. But safety/linebacker Kyle Fuller is possibly the team's most important player in this matchup. He can be lined up in a variety of spots, and he has made 14.5 tackles for loss this fall. His versatility could be huge, especially with "Shoelace" being such a dynamic player at the quarterback position. It will take a collective effort to thwart this Michigan offense, but Fuller is a big part of that challenge.