Has Bacarri Rambo played his last game as a Georgia Bulldog?

The star safety was suspended along with stud linebacker Alec Ogletree, according to Dawgpost.com, for a violation of team rules, and the suspensions will last for at least two games and as many as four. That means the Bulldogs will be without their services for the first two contests against Buffalo and Missouri. Whether they come back for the next two games against Florida Atlantic and Vanderbilt is unknown. 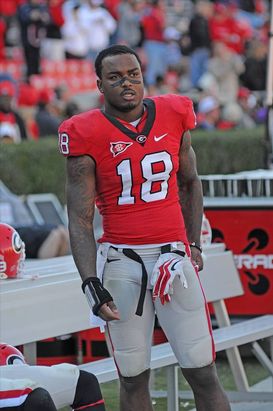 ICONHas Bacarri Rambo played his last down in Athens?

But according to the Athens Banner-Herald, Rambo may never see the field again with the Bulldogs, as his high school coach, Alan Ingram, told the newspaper that the rising senior had failed a drug test and was facing a mandatory four-game suspension. While Rambo will appeal the suspension, he is also reportedly considering entering the NFL's supplemental draft.

Ingram stressed that while Rambo does not smoke marijuana, he tested positive for the drug after supposedly eating pot brownies with a group of friends by accident.

Head coach Mark Richt's defense made huge strides in coordinator Todd Grantham's second season last fall, as the Bulldogs finished fifth nationally in points allowed. Rambo was an All-American, intercepting eight passes. He missed the season-opening loss to Boise State due to suspension after marijuana was found in his car during a traffic stop.

Meanwhile, despite dealing with a broken foot, Ogletree started eight games for the Bulldogs in 2011 and logged 52 tackles and forced three fumbles.

These suspensions come on the heels of cornerbacks Sanders Commings and Branden Smith being suspended by Richt earlier in the offseason, so three projected starters in the defensive backfield will miss the season opener.

And for Rambo, he may be done for good.

Ohio State star quarterback Terrelle Pryor was selected by the Oakland Raiders in last year's supplemental draft after he was suspended by the program and ultimately left school. If Rambo loses his appeal at Georgia and decides to pursue the pro route, it will be interesting to see if the NFL rules him eligible for the supplemental draft, which occurs in the summer.