Andy Dalton's importance to TCU's football team during his time in Fort Worth cannot be overstated.

The Cincinnati Bengals draft pick gave the Horned Frogs the steady leadership and strong play that allowed their offense to fully complement their aggressive and stout defense. 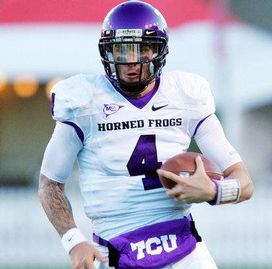 If Casey Pachall's injury is serious, the Horned Frogs could be in trouble.

So Casey Pachall, the heir apparent at quarterback, knew he had big shoes to fill. But will he be healthy enough to fill those shoes?

TCU head coach Gary Patterson told the Fort Worth Star-Telegram after a scrimmage Wednesday that his signal-caller will undergo an MRI on his sore shoulder after the injury forced him to miss the past three days of practice. However, Patterson does not expect any disastrous results to come back.

"We don't think it's a big deal," Patterson told the newspaper. "I don't expect to see anything."

If an MRI did reveal a serious injury, TCU would have to start redshirt freshman Matt Brown or true freshman Trevone Boykin in the Sept. 2 opener against Baylor. The Bears are seeking revenge from a dismantling at the hands of TCU last season.

While Pachall never started a game in his career, he is the most experienced quarterback on the roster after getting spot duty behind Dalton.