Teams with the easiest 2013 schedules

With spring football not too far away, let's take a look ahead toward the 2013 season and see which teams possibly have the most favorable fall schedules.

Of course, it's very early to predict the success of any team next season. After all, who would have thought Notre Dame would run the table this past regular season. But the following squads, at this time, seemingly could be primed for big years because of the slates they have on paper.

Ohio State: When a team's toughest road game besides Michigan is against Northwestern, it should feel pretty confident heading into a season. Especially when the Buckeyes are expected to start high in the preseason polls following an undefeated 2012 and feast off of a September slate that features Buffalo, San Diego State, Cal and Florida A&M. If you remember, Vanderbilt backed out of a game with the Buckeyes in the fall. Urban Meyer's squad will have tricky home contests against Wisconsin and Penn State, but a spot in the Big Ten title game could be on the horizon. And with a favorable schedule, a spot in the BCS title game could be there for the taking as well. 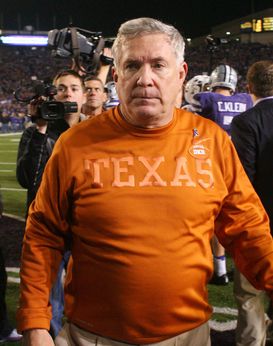 US PRESSWIRECan Mack Brown and the Longhorns get back to the top of the Big 12 standings?

Texas: Is this the year the Longhorns regain control of the Big 12? The schedule certainly isn't too daunting, although Mack Brown will try once again not to get embarassed by Oklahoma in the Red River Shootout. But when the two teams meet in Dallas, the Longhorns will have the experience edge. Meanwhile, the nonconference slate is manageable. Ole Miss heads to Austin in mid-September, which is a tough test because the Rebels took to Hugh Freeze right away in his first season. And the 'Horns will be coming off of a road tilt the previous week against BYU, which is always a tough "out." But if Manny Diaz's defense becomes tougher and David Ash stabilizes the quarterback position, the 'Horns could have a special season.

USC: The Trojans will be one of the most intriguing teams to watch heading into the 2013 campaign, as head coach Lane Kiffin will be entering a crucial season in Los Angeles. 'SC does not get Oregon in the fall, though the two teams could meet in the Pac-12 title game. The Trojans open with Hawaii before playing Washington State, Boston College and Utah State. That could set up an undefeated start so long as likely new quarterback Max Wittek looks better than he did in the team's Sun Bowl loss to Georgia Tech. The first real test for the Trojans comes in late September with a trip to Arizona State. Hitting the road for Notre Dame will be the team's toughest nonconference game, but Kiffin and Co. won't have to travel to The Farm this season. Instead, David Shaw's squad will try to continue its mastery of 'SC on the road.

Virginia Tech: The Hokies are the perfect case for why schedules look much different in the offseason. Because coming into the 2012 campaign, I thought Frank Beamer's squad had a relatively easy path to at least 9 wins. And that obviously didn't happen. Could Logan Thomas have a bounceback season, rise up NFL Draft boards and get the Hokies back into a marquee bowl game? The opener against Alabama aside, the Hokies have what looks to be a very manageable slate next fall, as they don't play Clemson or Florida State with the league schedule being re-worked because of new additions Syracuse and Pitt. Road games against Georgia Tech and Miami (FL) will be tricky, but overall Virginia Tech could be positioned for a bounceback year, especially with a soft nonconference schedule that features Western Carolina, East Carolina and Marshall.

Texas A&M: Any time a team has to play Alabama and navigate an SEC slate arguably shouldn't be on this list. But if you look at the Aggies' schedule closely, you'll notice that they don't have to play Georgia, Florida or South Carolina from the East division. And that's huge. Plus, when the Aggies do play the two-time defending BCS national champs, they'll get them in College Station on September 14 in the conference opener. The team's second year in the SEC will feature a cupcake city nonconference schedule, as Rice, Sam Houston State, SMU and UTEP fill that slate. The biggest test besides 'Bama will likely be a late November showdown at LSU. And you can't sleep on the tilt in Oxford, where A&M beat Ole Miss by just three points in 2012.