Teams with the most difficult 2013 schedules

This past Saturday, we took a look ahead toward the 2013 season to see which teams possibly have the most favorable fall schedules.

Today, let's take a look at some squads that could be in store for difficult seasons because of the slates they will encounter.

Tennessee: Butch Jones will have a challenging first season in Knoxville, and the schedule tops the list of reasons. The Volunteers have a difficult SEC slate, but things get tough even before those contests. On September 14, the Vols visit Oregon, which will continue to boast a high-powered offense despite the departure of Chip Kelly to the NFL's Philadelphia Eagles. And no one should overlook the Vols' Week 2 opponent: Western Kentucky, which is led by former SEC head coach Bobby Petrino. Then, it's onto the league schedule, which is brutal from the get-go. Tennessee's first four league dates are at Florida, back-to-back home games against Georgia and South Carolina and then a road test in Tuscaloosa against two-time defending BCS national champ Alabama. Brutal. Vol fans should be ecstatic if Jones is able to take this squad to a minor bowl game in his first campaign. 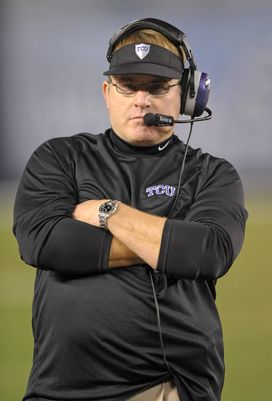 US PRESSWIREGary Patterson and the Horned Frogs face a tough schedule next fall.

TCU: The Horned Frogs will take centerstage on opening weekend when they take on SEC power LSU at Cowboys Stadium. While Gary Patterson's team should have a ton of fans in attendance, the Bayou Bengals will have their share of spectators as well. And though LSU lost a ton of talent from last year's squad, Les Miles and Co. will remain a tough "out." In terms of conference play, TCU has road tilts against Oklahoma and Oklahoma State as well as Kliff Kingsbury's Texas Tech squad. Meanwhile, Texas will be looking for revenge for its pitiful showing this past Thanksgiving night.

Arizona State: The Sun Devils had a nice first season under head coach Todd Graham, and the prospects seem to be high heading into next fall, especially with All-American DT Will Sutton surprisingly returning for his senior season. But ASU has nonconference games against Wisconsin and Notre Dame, with the latter coming in Dallas, as well as a road test against Stanford and home game against USC in a four-game stretch. The only good news for Graham and Co. is that Sacramento State is one of their nonconference opponents and the conference slate isn't terribly difficult outside of the contests with the Cardinal and the Trojans, although a road game against UCLA will be a stiff test.

Miami (FL): The Hurricanes still don't know what their future holds in terms of NCAA sanctions, but they do know that the slate in the fall will be challenging. Al Golden's squad hosts Florida in the second week of the year, although the 'Canes get Kansas State and Notre Dame off of their schedule. But there are some difficult ACC games on tap: at Florida State, at North Carolina and at newcomer Pittsburgh. Georgia Tech and Virginia Tech do have to travel to Sun Life Stadium, but it will certainly be a chore for the 'Canes to go bowling if the NCAA allows them to after self-imposing bowl bans the last two seasons.

Indiana: The Hoosiers are coming off of a very good recruiting class, and Kevin Wilson has shown that IU has a bright future under his leadership. But the improvement may not show up in the W-L record this fall. After beginning the season with nonconference games against Navy and Missouri, IU will begin Big Ten play with games against Penn State and back-to-back road tests against Michigan State and Michigan. The Hoosiers also travel to Wisconsin and Ohio State late in their conference schedule.