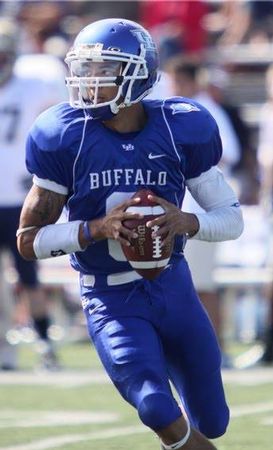 Zach Maynard takes over for Kevin Riley under center at Cal.

The former starter at Buffalo was given the nod two weeks after the team completed spring practice. The Golden Bears begin fall camp Aug. 6 and open the season Sept. 3 at Candlestick Park against Fresno State.

"Zach showed a tremendous amount of upside during spring practice and is the quarterback that gives us the best opportunity to win football games,” Tedford said in a press release. “He has the ability to both throw and run the ball effectively, giving us another dimension at that position that we haven’t had in a while.”

Maynard completed 57.5 percent of his passes for 2,694 yards with 18 touchdowns against 15 interceptions in 2009 for Buffalo. He also added 300 yards on the ground. He has two years of eligibility remaining after sitting out the 2010 season following his transfer.

Maynard is the half-brother of receiver Keenan Allen, who finished 2010 with 46 receptions for 490 yards and 5 touchdowns as a freshman.