Tedford on Riley: 'Looks like his career is over'

Kevin Riley has played his final game at California.

The senior quarterback suffered a serious knee injury in Saturday’s 35-7 loss at Oregon State, and he will miss the last four games of the season. 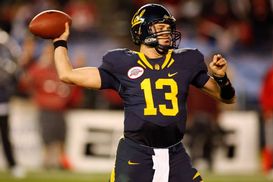 ICONKevin Riley's knee injury will end his career at Cal.

The signal caller had an MRI exam on his left knee Monday morning but there was too much swelling to determine the damage, head coach Jeff Tedford said. Another MRI exam was scheduled Monday afternoon.

Monday evening, Tedford said on his radio show that “it looks like his career is over.”

Riley was hurt in the first quarter against the Beavers when defensive lineman Brennan Olander hit him low as he completed a pass. Riley grabbed his left knee as he fell to the turf and was later helped off the field.

Junior Brock Mansion will start at quarterback for the Golden Bears at Washington State on Saturday. He replaced Riley when he was hurt last week.

Riley’s injury is just another in a line of disappointments for the quarterback, who experienced many highs and lows during his career in Berkeley.