Tennessee announced on Sunday morning that Derek Dooley will not return as the head coach of the Volunteers in 2013.

Athletic director Dave Hart made the announcement and will address the media this afternoon at a press conference. 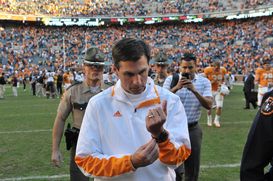 US PRESSWIREDerek Dooley has been relieved of his head-coaching duties at Tennessee.

"We very much appreciate the effort and energy that Derek Dooley and his staff have poured into our football program at the University of Tennessee," Hart said. "Derek and I met early this morning, and I informed him that I believed a change in leadership, despite the positive contributions he has made to the overall health of the program, was in the best long-term interests of Tennessee football. We will immediately begin the search for the best possible candidate to assume this leadership role."

Dooley will not coach the Volunteers in the season finale against Kentucky. Offensive coordinator Jim Chaney will be the interim head coach for next Saturday's game.

"I am sorry we could not generate enough wins to create hope for a brighter future," Dooley said. "Although progress was not reflected in our record, I am proud of the strides we made to strengthen the foundation for future success in all areas of the program.

"During the last 34 months, I've given my all for Tennessee, and our family appreciates all this University and the Knoxville community has given us."

Dooley leaves Knoxville with a 15-21 record, and he logged only four SEC wins in three years. The Vols sit at 4-7 and will miss a bowl for the second year in a row, which hasn't happened since the 1970's.

Tennessee was blown out by in-state rival Vanderbilt 41-18 on Saturday night.