Texas travels to Ames on Thursday night for a Big 12 clash with Iowa State at Jack Trice Stadium.

The Longhorns will be looking to remain unbeaten in conference play, while the Cyclones will be playing their first league contest.

Let's take a look at three things to watch in Thursday evening's clash between Mack Brown's Longhorns and the Cyclones led by Paul Rhoads.

1. How much will Swoopes play?: Longhorns quarterback David Ash will not play in this one, as he continues to deal with his head injury. Case McCoy, who is 36 of 57 passing for 330 yards with one touchdown and no interceptions on the year, will start in place of Ash. But Brown said it is possible that true freshman dual-threat signal-caller Tyrone Swoopes, who impressed in the Orange-White spring game, could see time at quarterback as well. Brown said this week that he plans to play Swoopes some against the Cyclones if it fits what the 'Horns want to do. Brown told reporters that the staff "worked Tyrone hard the last three weeks," so it will be interesting to see how much the youngster plays. It's beneficial for the 'Horns to get his feet wet, because he could be needed when the team plays Oklahoma's speedy and energetic defensive front in the Red River Shootout. 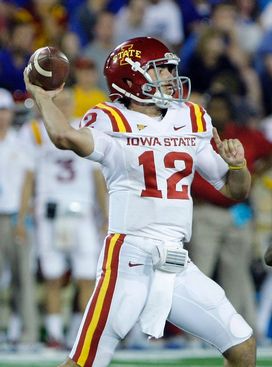 US PRESSWIRESam Richardson's dual-threat abilities have been hampered by an ankle injury.

2. The Rhoads factor: The Iowa State head coach has led his team to a victory over a Top 25 team in three straight seasons. And while Texas isn't ranked entering this contest, it's still Texas. The key for the Cyclones offensively will be whether quarterback Sam Richardson will be able to fully utilize his dual-threat abilities against a Texas defense that was gashed by BYU and Ole Miss. The 'Horns rebounded in a big way against Kansas State by allowing just 21 points before enjoying their bye last week, but which defense will show up for coordinator Greg Robinson? Richardson, meanwhile, has been dealing with a right ankle injury. However, he still had 255 passing yards and two scores last week in a win over Tulsa. But he only averaged 1.8 yards per carry. He is expected to be healthier for this one, though.

3. The X-Factors: Longhorns receiver/running back Daje Johnson is an explosive playmaker who missed the past two weeks because of an ankle injury. He is expected to be active and a big part of the Longhorns' offense after recording both a rushing and receiving touchdown early in the season. Meanwhile, Aaron Wimberly recorded 137 yards on the ground last week in the win over the Golden Hurricane, and he is now the team's starting running back after producing Iowa State’s first 100-yard rusher in more than a year. He should see a very active Longhorns defense — based off of the last time we saw Texas against K-State. Also keep an eye on Cyclones tight end E.J. Bibbs, who came to Ames from the JUCO ranks and should become a more sought-after target after last week's touchdown catch.

Iowa State hasn't won a Big 12 opener since 2002, but the Longhorns are 4-0 in Ames. Can Rhoads and the Cyclones deliver perhaps a knockout blow to Brown's 'Horns?