The 2013-14 college football bowl season continues on Friday, as the Texas Bowl takes place between Syracuse and Minnesota in Houston.

Here are some things to keep an eye on when you're tuned into the contest between the Orange and the Golden Gophers.

Win or lose in this postseason contest, Scott Shafer’s first season as head coach at Syracuse has to be labeled a success because of the suddenness of Doug Marrone's resignation last January and the fact that he took a lot of the Orange staff with him to the NFL. But there's no question that the 'Cuse would like to finish its first ACC season on a high note. A win by the Orange would give them a winning mark for the third time in four years and really cement a nice season after an 0-2 start.

Meanwhile, the Gophers have dealt with the loss of head coach Jerry Kill, who has remained in the coaches' box because of health issues. Kill hasn’t coached on the field since the Gophers’ 23-7 loss to Iowa on September 28. The Gophers went 4-3 under defensive coordinator and acting head coach Tracy Claeys, and a victory would give the program nine wins for the first time since 2003 as well as end a five-game bowl losing streak. No matter what happens Friday night, though, no one can take away the fact that the Gophers won four straight Big Ten games for the first time since 1973. 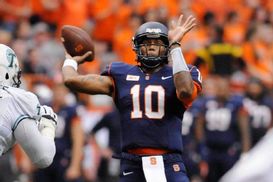 QBs on the spot: Both the Orange and the Gophers are hoping that their quarterbacks protect the football, because the running games should be productive with Syracuse's Jerome Smith (840 rushing yards and 11 touchdowns) and Minnesota’s David Cobb (1,111 rushing yards and seven scores). Drew Allen was benched after having a propensity to throw interceptions, so Terrel Hunt took over under center for the Orange early in the year. He threw 10 touchdown passes but also tossed eight interceptions in an up-and-down campaign. There have been times when the Orange offense has gone stagnant, and Hunt went through a six-game stretch with no touchdown passes. But he is a dual-threat who is second on the team in rushing with 426 yards. He also has five rushing scores. Meanwhile, Philip Nelson and Mitch Leidner are part of a two-quarterback attack for the Gophers. Both Nelson (1,288 passing yards and nine touchdowns) and Leidner (414 passing yards and one score) like to run. So all of the signal-callers in this game are mobile. But which one will make that extra mistake through the air? The 'Cuse is tied for 22nd in the country in sacks at 2.75 per game, so the Gophers could see consistent pressure on passing downs.

Will the streak end?: Syracuse is the only FBS team in the nation that has not allowed a 100-yard rusher this season. Boston College's Heisman Trophy finalist Andre Williams, who is the nation's leading rusher, was held to 29 yards on nine carries before leaving in the third quarter with an injury in the regular-season finale. Overall, the Orange have limited five teams to less than 100 yards on the ground, and they have notched 87 tackles behind the line of scrimmage. So Cobb, who ranks sixth in the Big Ten in rushing and has six 100-yard games this year, will definitely be tested.

Odds and ends: Minnesota is favored by 4 points ... The Gophers have won three of the four past meetings between the schools ... The Orange rank 112th in the nation with 7.5 penalties per game ... The Texas Bowl will be the 25th bowl appearance for Syracuse and the 16th postseason appearance for Minnesota ... Both Minnesota and Syracuse played Penn State and Northwestern this season. The Gophers beat both while the Orange lost both.