Texas in a tough spot against Ole Miss

Coming off of an embarassing effort in a loss at BYU last week, Texas will try to move forward and put speculation about head coach Mack Brown's job status on the backburner — at least for one week — when the Longhorns host Ole Miss on Saturday evening at Darrell K Royal–Texas Memorial Stadium.

In the loss to the Cougars last week, the 'Horns allowed dual-threat signal-caller Taysom Hill to rush for 259 yards, which was the second-most in BYU history, and three touchdowns. The sophomore led an efficient read-option offense that recorded 550 rushing yards, which was the most rushing yards Texas has ever allowed in a game. And it marked the end of the Manny Diaz era in Austin. 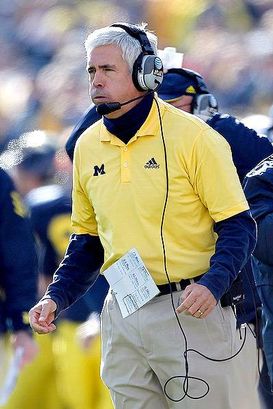 US PRESSWIRECan Greg Robinson turn around the Texas defense?

But will Texas net better results under Greg Robinson, who has taken over defensive coordinator duties after first being hired as an analyst for the program? Robinson, of course, was DC in Austin before becoming head coach at Syracuse. He also ran the defense for Rich Rodriguez at Michigan, and we all know how that turned out. Although Lloyd Carr didn't exactly leave the cupboard stocked in Ann Arbor.

Against the Rebels on Saturday night, Texas will face an offense that features a quarterback in Bo Wallace who has deceptive athleticism and a diminutive running back in Jeff Scott who has big-play potential every time he touches the ball. And Barry Brunetti will also be featured at quarterback in the Wildcat package.

Ole Miss averaged about five yards per carry last year when these two teams met, but Wallace really struggled through the air. Besides his effort against Alabama, it was Wallace's worst game of 2012, as he threw three interceptions and struggled with his accuracy. As of now the Longhorns' pass defense has not been a problem, so Wallace will have to make some plays through the air. But if Ole Miss can run the ball effectively early, will Hugh Freeze and Co. even need to air it out?

The Rebels struggled defensively in the contest against the Longhorns last year, but the 'Horns will be without David Ash and Daje Johnson in this contest. Case McCoy will get the start at quarterback, and Texas is just 1-5 when McCoy attempts at least 16 passes in a game. Expect a heavy dose of the run for the 'Horns after averaging 6.5 yards per rush last season against the Rebels. However, this is a much improved Ole Miss defense, although it will still be without star linebacker Denzel Nkemdiche.

Texas failed to make adjustments on defense against BYU last week, and that fell on Diaz. But can it improve under Robinson in a week's time and contain a dangerous Ole Miss offensive attack?