Not even a seven-loss season can affect Texas’ recruiting prowess.

After already securing early verbals from quarterback Connor Brewer and wide receiver Thomas Johnson — two of the best nationally at their positions — the Longhorns landed receiver Cayleb Jones, who is currently ranked No. 3 in the NFP’s WR rankings for the Class of 2012. 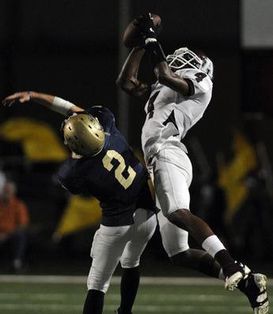 Cayleb Jones is staying in Austin.

The 6-2, 189-pounder was always considered to be a strong lean toward the Longhorns, but he made it official on Sunday afternoon. Of course, this commitment is non-binding.

Even though he saw action in just seven games in 2010 because of a right elbow injury, Jones finished with 63 receptions for 860 yards and eight touchdowns at Austin High. In a full sophomore season, the son of former Dallas Cowboys All-Pro linebacker Robert Jones caught 91 passes for 1,140 yards and nine touchdowns.