With uncertainty surrounding his future with the team, Greg Davis stepped down as Texas offensive coordinator on Monday.

Following the Longhorns' first losing season since 1997, Davis was squarely on the hot seat as head coach Mack Brown evaluated the state of his team. Davis’ offensive unit finished 59th in total offense and 87th in scoring in quarterback Garrett Gilbert's first year as the starter. The sophomore threw just nine touchdowns against 17 interceptions. 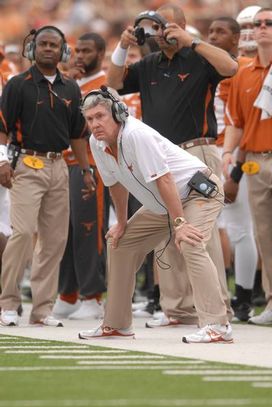 ICONTexas head coach Mack Brown will have a new offensive coordinator after the resignation of Greg Davis.

Davis worked with Brown dating back to Tulane in the 1980s and North Carolina in the '90s.

“I've had a great 13 years here and enjoyed every minute of it," Davis said.

But Brown's desire to revamp Texas' spread passing offense to include a power running game failed miserably this season.

Two other Texas assistants, offensive line coach Mac McWhorter and defensive line coach and special teams coordinator Mike Tolleson, will retire. The school announced that any replacements likely won't be made until after bowl season concludes.

"These are three special people who have given a lot of themselves and their families to the University of Texas and its football program," Brown said in a statement.

"They are not only great coaches, but men who handled themselves with tremendous integrity, class and dignity on and off the field during their time here. I want to say thank you and wish them well because they will be missed."