Texas QB Gilbert out for the season

After losing his starting quarterback job, Garrett Gilbert has been permanently shelved.

Texas announced Tuesday morning that the junior signal-caller underwent successful shoulder surgery and will miss the remainder of the 2011 season. Gilbert underwent an MRI last week that revealed damage in his right shoulder, an injury that occurred in the team's season opener against Rice. 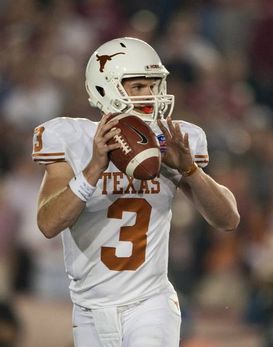 ICONIt's been a tough couple of seasons at Texas for Garrett Gilbert, who will miss the rest of 2011 after shoulder surgery.

“My shoulder was getting progressively worse and when the doctors did an MRI last week, their recommendation was for me to get it fixed,” Gilbert said. “That’s why I decided to have the surgery now, so I can get it taken care of, start my rehab and be healthy and ready to go for next year.

"I’m disappointed that I won’t be able to play the rest of this year, but I’ll be out there helping (co-offensive coordinator and quarterbacks) coach (Bryan) Harsin and the quarterbacks as much as I can.”

Gilbert can apply for a medical waiver to gain another year of eligibility because he played in less than 20 percent of UT's games this season.

Before the injury, he had fallen to third on the depth chart behind sophomore Case McCoy and freshman David Ash.

He had been yanked midway through the team's win over BYU two weeks ago after completing just 2 of 8 passes for eight yards with two interceptions.