Texas will be without its leading receiver Saturday when the Longhorns face Oklahoma in the annual Red River Rivalry.

Mike Davis will miss the game as he nurses a tweaked left knee — an injury that kept him out for most of the second half of last Saturday’s debacle against UCLA. 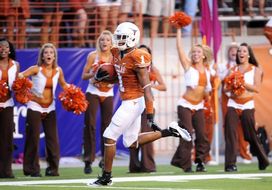 ICONFreshman WR Mike Davis will be out of action for Texas against Oklahoma.

The freshman leads the team with 16 catches, good for 183 yards and two touchdowns.

The Longhorns have struggled to find an identity for their offense all season, and the loss of Davis certainly doesn’t help matters. Head coach Mack Brown wanted to re-establish a rushing attack this season but a lead running back has yet to emerge. With the ground game stalling, there was a growing sentiment that the Longhorns might start spreading the field with their receivers and letting quarterback Garrett Gilbert lead an increased aerial attack. Davis had emerged as one of Gilbert’s favorite targets