As we all devour numerous turkey sandwiches and way too many slices of pie, let's take a look at what shapes up to be a fantastic weekend of college football in Week 13.

7:30 p.m. ET: There is just one college game on Thanksgiving, but it's at least intriguing. TCU travels to Austin to battle Texas on ESPN in a Big 12 showdown that essentially takes the place of the heated Texas-Texas A&M annual rivalry. Hopefully, if the Longhorns and Aggies win out, we can get to see Texas and A&M battle in the Cotton Bowl. The Longhorns are playing their best football of the season and lead the Big 12 in fewest turnovers (eight) after Kansas State (nine) had three last week in its loss to Baylor. 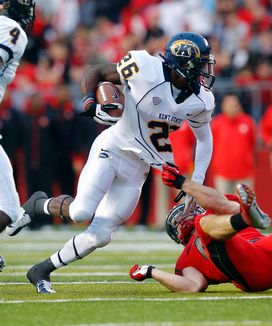 US PRESSWIREKent State's Dri Archer is arguably the most overlooked running back in the nation.

11:00 a.m. ET: Syracuse at Temple square off on ESPN2, while Ohio travels to Kent State in #MACtion on ESPNU. The Orange are looking to improve their bowl stock after becoming eligible with a road win last week against Missouri. Meanwhile, the Bobcats are looking to steal a win over a Golden Flashes squad that cracked the NFP Top 25 this week.

Noon ET: Iowa hosts Nebraska on ABC as the Hawkeyes finish a disastrous 2012 campaign. Hopefully this rivalry picks up steam now that the Cornhuskers are in the Big Ten. A win and Bo Pelini's squad will play Wisconsin in the Big Ten title game.

1:00 p.m. ET: If you still have yet to see dual-threat Heisman Trophy-contending quarterback Jordan Lynch, this is your last chance in the regular season. Although, Northern Illinois will be in the MAC title game. But if you want to see one of the most underappreciated teams in the country, check out Lynch's Huskies as they travel to Eastern Michigan on ESPN3.

2:30 p.m. ET: It seems that every time LSU and Arkansas meet, something wacky happens. The Tigers and the Razorbacks will meet on CBS, and the Hogs will try to play BCS spoiler as they have been eliminated from postseason consideration. However, there is a chance that the Tigers could net an invite to a BCS bowl game depending on how things shake out in the rest of the SEC.

3:30 p.m. ET: Washington travels to Washington State for an Apple Cup showdown on FOX. The Cougars will be looking to put a nice bow on what has been a disappointing first season under Mike Leach, while Steve Sarkisian's bunch will look to improve their bowl status.

10:00 p.m. ET: The day closes with a Pac-12 in-state rivalry, as Arizona State travels to Tucson to take on Arizona on ESPN in a battle of first-year head coaches at their respective schools. Both squads are 4-4 in league play, so the winner will likely get the more intriguing bowl invite.

Noon ET: Michigan travels to Ohio State on ABC while Georgia Tech travels to Athens to take on Georgia on ESPN. The Buckeyes are trying to finish an undefeated season in Urban Meyer's debut campaign in Columbus. What could have been if OSU self-imposed a bowl ban last year...Meanwhile, can the Yellow Jackets' triple-option attack pose problems for Todd Grantham's 3-4 defense?

3:00 p.m. ET: Oregon travels to Oregon State on the Pac-12 Network for the Civil War showdown in Corvallis. The Ducks will look to rebound from their first defeat of the season last week at home to Stanford, which essentially knocked them out of the BCS title game race. 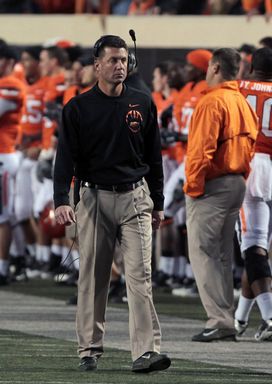 US PRESSWIREMike Gundy has done one of his best coaching jobs with the Pokes this season.

3:30 p.m. ET: Auburn travels to Tuscaloosa to take on Alabama in the Iron Bowl on CBS, and it could be Gene Chizik's last game as Tigers head coach. Florida tries to remain in the BCS title picture when it travels to Tallahassee to take on Florida State on ABC, and both teams will look to put on a better showing than the one they gave us last season. Meanwhile, Oklahoma State travels to Norman to take on Oklahoma in the Bedlam Series on ESPN. Mike Gundy's Pokes are hot, as they're coming off a 38-point thrashing of Texas Tech.

6:30 p.m. ET: Stanford travels to the Rose Bowl to battle UCLA on FOX in a game that doesn't mean a whole lot for the Bruins, as they already clinched a spot in the Pac-12 title game. However, if the Cardinal lose, Oregon could still slip into the conference championship game if they get by Oregon State.

7:00 p.m. ET: Steve Spurrier and South Carolina go on the road to take on Dabo Swinney's Clemson team on ESPN. There is no love lost between these head coaches, and the Tigers could essentially wrap up a BCS bowl slot with a win. In addition, Ole Miss will host Mississippi State as the Rebels try to become bowl-eligible in Hugh Freeze's first season in Oxford.

8:00 p.m. ET: Notre Dame travels to USC needing one more win to advance to the BCS national championship game. Trojans quarterback Max Wittek, filling in for an injured Matt Barkley, essentially guaranteed victory this week. If Fighting Irish quarterback Everett Golson plays a rather clean game, the Irish should be headed to Miami. The game will be aired on ABC.

10:30 p.m. ET: If you like #WACtion, catch Louisiana Tech at San Jose State on ESPN2. In an era of conference realignment, it's a shame that fans are losing this football conference. It's ironic, too, because the WAC technically was college football's first Superconference.