The 10 most intriguing spring quarterback battles

Spring practices continue to open up across the country with players looking to impress coaching staffs and climb up the depth charts.

Let’s take a look at 10 of the most intriguing quarterback battles that will play out during spring drills — many of which will likely last into fall camp.

Tennessee: The Vols have a lot of program momentum despite going through another 5-7 campaign in 2013. Fans are excited about the Butch Jones era, but who will be under center this fall running coordinator Mike Bajakian's offense? Josh Dobbs and redshirt freshman Riley Ferguson are battlling Justin Worley and Nathan Peterman for the right to try and stabilize an offense that struggled in '13. Dobbs played a bit as a true freshman against some very tough competition, but Ferguson is intriguing and is the best pure passer of the bunch. Dobbs brings athleticism to the position that the Vols have not seen in a long time, and he also has very good arm strength and a work ethic not seen in a ton of youngsters. Worley is the most experienced but has seemingly reached his peak at the position, while Peterman has an uphill battle. Dobbs and Ferguson could emerge as the leaders after camp.

USC: Incumbent Cody Kessler returns after winning the starting job over Max Wittek, who is transferring and could end up at Texas. Kessler is coming off of a strong showing in the bowl win over Fresno State, but a new regime means that he has to prove himself once again. Redshirt freshman Max Browne has been tabbed by many as the future at the position, while early enrollee Jalen Greene will also see a lot of reps. All eyes, though, will be on how hard Browne can push Kessler as the Trojans shift to an offense that will be up-tempo and no-huddle. Kessler completed 65 percent of his passes last fall for 2,968 yards and 20 touchdowns against seven interceptions, but Sarkisian recruited the Washington-native Browne when he was in Seattle. And Browne has the better skill set, having participated in the Elite 11 competition.

Alabama: The Jake Coker era won't begin this spring, but there's no question that the former backup to Jameis Winston did not leave Florida State to remain on the sideline. The QB who played at the same high school as AJ McCarron has good size and a very good arm, but can the redshirt junior face stiffer competition than some have projected when he arrives, especially because he has zero career starts and will miss all of spring practice? Senior Blake Sims, redshirt sophomore Alec Morris, redshirt freshmen Parker McLeod and Cooper Bateman as well as early enrollee David Cornwell have all been highly recruited signal-callers and in the system longer. Sims, who has seen action as McCarron's backup, definitely has a chance to at least build a nice advantage before Coker's arrival and give new offensive coordinator Lane Kiffin reason to believe that the unit could be in good hands with Sims or even Bateman. But all eyes will be on Coker when he makes it to Tuscaloosa officially despite only going 18-of-36 passing for 250 yards with no touchdowns and one interception last fall. 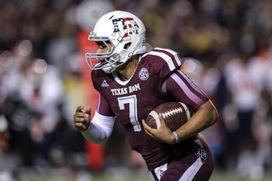 Can Kenny Hill beat out Matt Joeckel and Kyle Allen for the starting job at A&M?

Texas A&M: It certainly will be odd to see the Aggies open up the season against South Carolina without Johnny Manziel, who won the Heisman Trophy in his first season as the starter and was one of the most electrifying college players we've ever seen. But life goes on in College Station, and head coach Kevin Sumlin will have to decide who is best to run his offense between Matt Joeckel, Kenny Hill and Kyle Allen. We saw Joeckel in the first half of the season opener last year when Manziel was suspended. He is a solid signal-caller who would likely run the offense quite efficiently despite attempting passes in just four games in 2013. He does seem to lack the "wow" factor, though, which could open the door for Hill, who logged some snaps last season as well. How much has Hill matured mentally in terms of film prep? Allen, meanwhile, was one of the best senior prospects in the country in '13 and is an early enrollee.

Clemson: Tajh Boyd was a great player, but the Tigers have a trio of signal-callers in Cole Stoudt, Chad Kelly and Deshaun Watson with a ton of talent. We saw Stoudt last season get a nice amount of game action, as he completed 49 of 57 passes with five touchdowns running the productive Chad Morris offense. He has good size, knows this offense very well and is ready to be the starter. But the sophomore Kelly is familiar with the offense as well. He will likely have to fend off Watson for the No. 2 gig. The early enrollee dual-threat has a chance to be the next great Clemson QB, although he will likely be doing it under a new OC (Morris has to take a head gig soon, right?). Head coach Dabo Swinney has to love the depth he has at the most important position.

Texas: There's no doubt that new head coach Charlie Strong will instill a new level of toughness to the Longhorns in his first season in Austin. But how will the offense look, and who will be running the show? The program received great news when David Ash was cleared after his concussion issues, but will he be completely back and ready to fight for the starting job? Tyrone Swoopes saw some action late as a true freshman, and he has the size-speed combination that made a number of programs go after him on the recruiting trail. Meanwhile, former Elite 11 participant Jerrod Heard has a chance to impress Strong, offensive coordinator Joe Wickline and quarterbacks coach Shawn Watson as well. And as mentioned earlier, what if Wittek decides to come to Austin?

Wisconsin: Joel Stave has some work to do in order to remain the starting quarterback in Madison, and he'll actually be somewhat behind when he finally makes it onto the field this spring. The incumbent is still dealing with a right shoulder injury, so his work will be limited early in camp. Consistency was an issue for Stave in 2013, but he has started 19 games over the past two seasons (including all 13 last year). Head coach Gary Andersen has said that it is Stave's spot to lose after he passed for 2,494 yards and 22 touchdowns while completing 61.9 percent of his throws in '13. But he also had 13 interceptions. Former JUCO transfer Tanner McEvoy has moved back to quarterback from safety, and Andersen has always loved his dual-threat signal-callers. Early enrollee freshman D.J. Gillins, who has the athleticism to bring excitement to the position, is also in the mix. But keep an eye on Bart Houston, who has a quick release and a strong arm. Offensive coordinator and quarterbacks coach Andy Ludwig will push the envelope with all of his QBs this offseason to determine who is the best fit to start the season opener.

Michigan: Devin Gardner put together a fantastic performance in his final game of 2013, which was the Wolverines' close loss to Ohio State. However, even though he had virtually no help from his running backs and offensive line, Gardner did not perform up to his talent level throughout last fall. And with the team emphasizing a pro-style offense with new coordinator Doug Nussmeier, the fifth-year senior Gardner absolutely has a lot to prove. Shane Morris is the future at the position, but exactly when will he get h is full-time shot after filling in for Gardner during the team's bowl loss to Kansas State? Gardner, who has to prove that his foot is 100 percent, had six fumbles and tossed 11 interceptions last season.

Nebraska: The Taylor Martinez era has ended in Lincoln after his injury-riddled 2013 campaign, so Tommy Armstrong and Johnny Stanton are battling for the starting gig. Armstrong won seven of the eight games he started last fall, but his play wasn't pretty. He completed just over 50 percent of his throws with one more touchdown than interception, but that experience bodes well for him this spring. Stanton redshirted last fall but has the more natural talent of the two. A strong spring by him could put a ton of pressure on Armstrong this fall.

Washington: New head coach Chris Petersen and the Huskies have a major question mark under center with projected starter Cyler Miles suspended (along with wide receiver Damore'ea Stringfellow) and not available as of now. Petersen stopped short of saying that Miles would miss all of spring ball, but there's a chance that Miles won't ever see the field again in Seattle. In the meantime, UW has just two signal-callers this spring: Jeff Lindquist and Troy Williams, both of whom will get a ton of work. Lindquist has a strong arm and more experience on campus, but Williams projects to be an exciting dual-threat. The Huskies need to replace three-year starter Keith Price, and Miles was projected to be the likely starter for 2014 after serving as Price's backup last season. He appeared in eight games with one start, going 37-of-61 passing for 418 yards with four touchdowns and two interceptions. But his suspension for an alleged post-Super Bowl assault puts the QB position seriously up in the air. 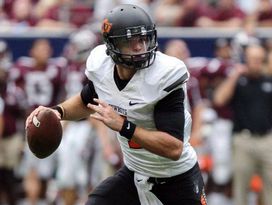 Can J.W. Walsh bring more consistency to the QB position?

Heading into the new year I thought for sure that J.W. Walsh essentially had the Oklahoma State starting job locked up. But there is a lot of buzz about Mason Rudolph and even Arizona transfer Daxx Garman. Walsh has great athleticism and is a tough kid, but his passing is just too inconsistent and inaccurate, so he has a tough battle even with Clint Chelf gone. Rudolph has a strong arm and good size, while Garman also has nice measurables. Can Walsh make enough improvement as a passer this offseason, or is it a matter of time before Mike Gundy hands the offense over to a youngster?

Jeff Driskel, who is coming back after a broken leg, is safe at Florida. But it will be interesting to see if Elite 11 early enrollee Will Grier can make a significant impact this spring. Skyler Mornhinweg will also try to make a strong impression after the Gators' disastrous 2013 campaign. I think new offensive coordinator Kurt Roper can help this offense significantly improve because like David Cutcliffe he knows quarterbacks.

Logan Thomas is no longer in Blacksburg, and it appears that a former Texas Tech signal-caller could be in line to replace him. Michael Brewer arrives this summer from Lubbock, but he will have to beat out Mark Leal for the starting gig with the Hokies. Brewer was expected to be the starter for the Red Raiders last year but dealt with a bad back. Leal wasn't impressive in limited time last season and will struggle to hold off Brewer when he arrives.

Clint Trickett should be able to hold off Paul Millard and Skyler Howard at West Virginia after the Florida State transfer gutted out the 2013 campaign.