With the calendar flipped to October, let's take a look at the five biggest surprise teams in the nation after the first month of the season (including this past weekend's games).

Clemson (5-0): We knew that the Tigers offense was going to score points because of new coordinator Chad Morris. But did anyone think that quarterback Tajh Boyd would be so effective this soon? And even with his high-star ranking coming out of high school, the emergence of freshman receiver Sammy Watkins into a stud impact player has been impressive. With sophomore receiver DeAndre Hopkins and junior tight end Dwayne Allen as well as running back Andre Ellington, this offense is one of the most feared in the nation. But the most impressive aspect of Dabo Swinney's team has been its ability to "get up" for tough tests week after week. Beating Auburn was a step in the right direction, but taking care of ACC contender Florida State was a statement. Not satisfied, Clemson finally took its act on the road and held Virginia Tech -- considered a dark horse national title contender -- to just three points. This team is legit, and I am buying Swinney as a program-builder. Road games against Georgia Tech and South Carolina are the only two difficult tests left in 2011. 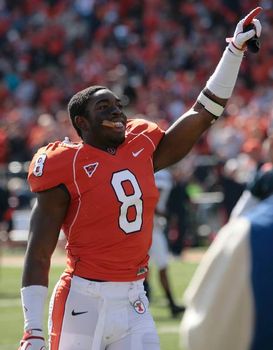 ICONA.J. Jenkins is the beneficiary of a maturing QB and a smart offensive coordinator.

Illinois (5-0): The Fighting Zookers truly showed some fight this past week, rallying from a 28-10 deficit in the third quarter to claim a 38-35 win over in-state rival Northwestern. Quarterback Nathan Scheelhaase looks so much more comfortable in Paul Petrino's offense, throwing for a career-high 391 yards against the Wildcats, and former Florida receiver A.J. Jenkins caught 12 balls for a school-record 268 yards and all three of Scheelhaase's scores. The Illini finally have a passing attack again to go along with a ground game that is deep with Donovonn Young, Troy Pollard and Jason Ford. And the defense is allowing just 295.6 yards per game and just 79.0 yards per game on the ground. The remaining schedule isn't too difficult either. With the exception of a home game against Wisconsin on Nov. 19, the Illini merely travel to Penn State and have home tilts with former powerhouses Ohio State and Michigan. With just four road games on the slate, Ron Zook's squad could be primed for a standout season.

Georgia Tech (5-0): The Yellow Jackets took a major step back last season after their Orange Bowl appearance following the 2009 campaign. Orwin Smith leads an always-prolific rushing attack, but it's been the play of quarterback Tevin Washington that has been most impressive. Paul Johnson is letting Washington air it out, as the signal-caller has 10 touchdowns against just one interception. And he has thrown for 938 yards on just 54 attempts, with receiver Stephen Hill being the biggest beneficiary of the aerial attack. But if the Jackets want to be serious ACC contenders, Al Groh's 3-4 defense will have to play better than it did against N.C. State, when it seemed to go through the motions after holding the Wolfpack to 15 plays and no points in their first three series of the game. It's been a better unit on third downs, but the Jackets allowed a 100-yard rusher for the second consecutive week as well. Back-to-back home games against Clemson and Virginia Tech in late October and early November will determine whether GT can be a serious player in the ACC.

Kansas State (4-0): Bill Snyder continues to get it done in Manhattan. The 71-year-old veteran head coach led his team to victory at Miami and followed that up by dealing Robert Griffin III and Baylor their first loss of the season in a 36-35 upset win. Wildcats quarterback Collin Klein may not be a household name, but the dual-threat signal-caller has played well for a team that doesn't have very many playmakers. Who knows how far this unbeaten stretch will last, as Snyder's squad has to face an always-sneaky Missouri team this week. But running the football and playing sound defense works, especially for any K-State team playing for Snyder.

Michigan (5-0): I was reluctant to put the Wolverines on this list because they didn't have problems offensively in the previous regime, so we knew that they would score points even working in a new scheme. But Greg Mattison's defense has been the real story here, and the play of this unit has surprised me despite believing that they would be improved under the former Baltimore Ravens assistant. Most of the talent played under former coordinator Greg Robinson, but Mattison has put his players in position to succeed this fall. They're blitzing and causing turnovers, and they've allowed only 10 points combined in the last three games to Eastern Michigan, San Diego State and Minnesota. Granted, those teams aren't world-beaters, but the Aztecs have one of the best running backs in the nation and the Gophers are a Big Ten squad -- rebuilding or not. Impressive wins indeed. But now we'll wait to see what the Wolverines have in store the rest of the way because they started last season 5-0 as well.