Four highly sought quarterbacks in the Class of 2014 gave verbal commitments on Friday, reshaping the arms race for top rising senior signal-callers at programs across the country.

Jacob Park, a 6-3, 197-pounder from Stratford High School (Goose Creek, S.C.), committed to Georgia over Alabama and Virginia Tech after a strong performance in front of Mark Richt and his staff at the Bulldogs’ camp last week. The dual-threat is expected to continue to rise up recruiting rankings following several good showings this spring at various camps. 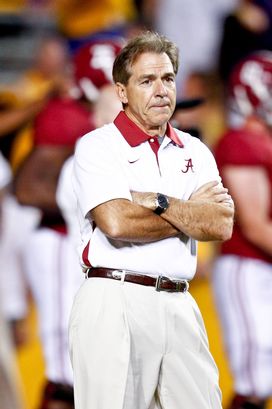 US PRESSWIRENick Saban and Alabama landed a verbal pledge from David Cornwell.

After Park's commitment, Alabama received a verbal pledge from David Cornwell, who is one of the best pro-style prospects in the 2014 class. The 6-5, 235-pounder from Norman North High School (Norman, OK), who recently won his appeal for a fifth year of high school football, is the best quarterback prospect to sign with the Crimson Tide in the Nick Saban era. He chose the Crimson Tide over offers from Notre Dame, Auburn and several other major programs. Cornwell has a very strong arm and also possesses very good athleticism as well. One of the top performers at the U.S. Army Combine in January 2013, Cornwell passed for 2,742 yards and 27 touchdowns and rushed for 755 yards and six more scores last year.

Going under the radar was the commitment of Zack Darlington, a 6-1, 201-pounder from Apopka High School (Apopka, FL) who is one of the better dual-threat signal-callers nationally. He is a nice "get" for Bo Pelini and his staff as the Huskers look for a future QB to step in for Taylor Martinez. While Darlington is a very good runner, his arm strength gets a bit overlooked. Ohio State, West Virginia and Ole Miss were programs that had offered Darlington.

Finally, South Florida continues to make a splash this recruiting cycle under new head coach Willie Taggart, as Quinton Flowers of Miami Jackson High School (Miami, FL) pledged to the Bulls. The 6-foot, 203-pound dual-threat has a good arm and very good athleticism. While he is more effective as a runner than a thrower, he has a high ceiling. While some recruiting analysts believe he could make an impact at running back or safety at the next level, he will get a chance to play quarterback at USF.

So which 2014 quarterbacks will be next to commit?

The nation's top remaining dual-threat is Brandon Harris of Parkway High School (Bossier City, LA). LSU, Auburn and Ohio State are all in the running for his verbal. I think he'll land at LSU, but don't sleep on the Buckeyes.

Because Virginia Tech was unable to land Park or Cornwell, Frank Beamer and Co. may set their sights on Andrew Ford from Cedar Cliff High School (Camp Hill, PA). The 6-2, 187-pound pocket passer was at the Hokies' camp this offseason and performed well. He also is an Elite 11 selection.

Tyler Harris of Pierce County High School (Blackshear, GA) is also a name to keep an eye on. The pocket passer has good size and a strong arm, and Alabama was interested before landing Cornwell. Fellow Georgia native Brooks Barden also could see his stock rise because he has similar size and arm strength.