Northwestern kicked off spring practice on Monday morning trying to put behind 2010’s late-season swoon and look ahead to brighter days.

The National Football Post had a chance to speak with Wildcats head coach Pat Fitzgerald via telephone on Monday afternoon to talk about a variety of topics, including the first day of spring ball, the expectations for 2011, Chicago White Sox baseball and much more. To listen to the interview, click the play button at the top of the page.

And while you listen, take a closer look at the Wildcats as they get a jump on preparing for the 2011 season.

Quarterback Dan Persa was Northwestern’s offense last season. He not only frustrated defenses with his arm, throwing for over 2,500 yards and 15 touchdowns against just four interceptions, but he also accounted for much of the Wildcats’ ground game, rushing for over 500 yards and nine more scores when NU didn’t have a real dynamic rusher at the tailback spot. So when the dual-threat signal-caller went down with a ruptured Achilles tendon while tossing the game-winning touchdown pass against Iowa, the NU offense was grounded. Missing their first-team All-Big Ten quarterback, the Wildcats finished the season with three straight losses, including the showcase rivalry game against Illinois at Wrigley Field. 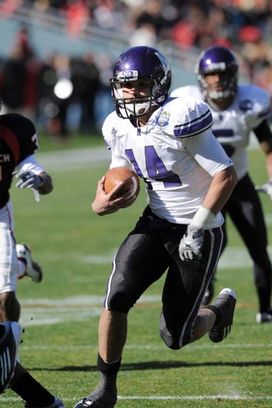 ICONKain Colter will get extra reps with Dan Persa on the sideline.

While Persa remains ahead of schedule in his recovery, he will be sidelined for the most part this spring, giving way to backups Evan Watkins and Kain Colter, who both played when Persa went down. Watkins started the last three games of 2010 while Colter saw action in spot duty. While Persa is in no danger of losing his job, it will be good for Watkins and Colter to get the extra reps as they battle to become the top backup. Colter’s skill set is more suited to run NU’s offense if Persa was to go down again, but Watkins has more experience. In the TicketCity Bowl loss to Texas Tech, Colter actually played running back when Mike Trumpy went down with an injury, so his athleticism is valued. Trevor Siemian will also see time under center.

Is there a workhorse back on the roster?

It was assumed that Arby Fields would be the lead back entering last season, but he tumbled down the depth chart and is no longer with the program. Trumpy was an unexpected nice surprise last season for the ‘Cats and he will be available this spring but will have a cast on the right wrist he injured against Illinois on Nov. 20. The 6-1, 205-pounder logged 530 yards on 116 carries and found the end zone four times last season to help take some of the offensive load off Persa. Keep an eye also on soon-to-be sophomore Adonis Smith, who played very well in losses to Michigan State and Texas Tech but otherwise didn’t have his number called too often.

Will the defense be improved?

As much as the offense struggled when Persa went down, the loss of the team’s leader seemed to affect the defense as well. While the Wildcats had problems tackling throughout the year, that area became a real sore spot during the last three games of the season when the team gave up a total of 163 points. In general, the pass rush was lacking and the front four didn’t play physical enough. Mike Hankwitz will have his work cut out for him finding playmakers for the fall.

Jordan Mabin is set at one corner, but who will play opposite him? Jeravin Matthews could get the first crack. Linebacker Bryce McNaul returns but will miss at minimum the first week of spring after offseason surgery. The ‘Cats will need to find starters at the other two linebacker spots following the departures of Quentin Davie and Nate Williams, though, and Roderick Goodlow could emerge as a starter after missing the entire 2010 season with a knee injury.

Get tougher up front

There’s no question that the front four of the defense was less than stout on too many occasions. But the offensive line really disappointed as well despite coming into the year as an experienced group. Will the ups and downs of last season be a valuable learning tool, or will this unit remain inconsistent and weak in the fall? Even with Persa’s escapability, he was still sacked 34 times — that’s how disappointing the line play was last season in Evanston.

Starting defensive tackle Jack DiNardo will miss spring ball after undergoing shoulder surgery, and nickel back Hunter Bates will also be out after breaking his leg in the bowl game.

The Wildcats conclude spring drills on April 16 with the team’s annual spring game.