The expanding role of Oregon's Thomas

De'Anthony Thomas almost made LaMichael James look slow in last year's 45-38 Rose Bowl victory over Wisconsin. That's how explosive the Oregon Duck was in his freshman campaign. And, in particular, during that postseason showcase against the Badgers.

Thomas scored on runs of 91 and 64 yards against Bret Bielema's squad. And those just happened to be his only two carries of the game, making his scoring bursts even more impressive.

With James now in the NFL, the issue of carries in Eugene has been a hot topic of discussion with preseason camp underway. Of course, the top backup from the last few seasons, Kenjon Barner, is slated to be the No. 1 running back for the Pac-12 power. And there's little doubt that he will be able to provide consistent productivity week in and week out, just as he has been able to do the last few years when James was nicked up or needed a breather.

But because Thomas is such a unique athlete, many Duck fans are pining for head coach Chip Kelly and offensive coordinator Mark Helfrich to increase the workload of Thomas in the backfield. 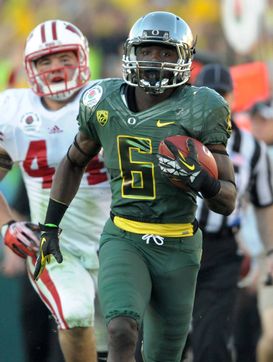 However, Duck fans shouldn't expect that to necessarily be the case.

Despite the fact that Thomas averaged nearly 12.0 yards per offensive touch last season — essentially serving as a first down waiting to happen — Kelly remains concerned about wear and tear on the body of the 5-9, 173-pound Los Angeles native, who totaled 595 rushing yards, 605 receiving yards and 1,035 return yards for a combined 2,235 all-purpose yards and 18 total touchdowns in 2011.

Last fall, Thomas recorded a combined 101 offensive touches, both when lined up in the backfield and aligned in the slot, where he served as a key component in the passing game. That number certainly will rise, as the loss of James will make it a priority to get Thomas the ball more often. But don't expect the workload to dramatically increase even with James off to the NFL.

Kelly was impressed with the ability of Thomas to step in immediately as a true freshman and produce right away, which is why he may lean on incoming freshman Byron Marshall to do the same thing in 2012. While Thomas will certainly continue to be used as a receiver as well as get carries with or without Barner in the backfield, expect Thomas to see more time on special teams — an area in which his impact is expected to dramatically increase. He will get plenty of touches on special teams because the Ducks are in need of an explosive punt returner to take the place of James. And although Kelly's up-tempo, high-octane offense often produces short scoring drives, field position is still essential to any team's success. And with Thomas providing his electric return skills, field position shouldn't be a problem too often for the Ducks.

A lot can change between now and when Oregon begins the meat of its schedule, especially if Marshall is not able to step in and produce right away like Thomas did last season. But if the Ducks get enough production from Barner and Marshall with Thomas sprinkled into the backfield, expect "Black Mamba" to make even more headlines in the third phase in 2012 — providing more ammo for his Heisman Trophy campaign.