The five most underrated bowl games

Let's take a look at five matchups on the 2012-13 postseason slate that seem to be going under the radar but have the potential to be very good games.

Of course, this list excludes all BCS games and some of the more notable non-BCS games.

Robert Griffin III may have raised the national profile of the Baylor program last season with his Heisman Trophy-winning campaign, but head coach Art Briles performed another fantastic coaching job this season by helping rally his team to season-ending consecutive wins over Kansas State, Texas Tech and Oklahoma State. At Qualcomm Stadium in San Diego, Baylor will meet UCLA for the first time in program history. The Bruins, of course, were the Pac-12 runner-up in Jim L. Mora's first season in Westwood. Baylor leads the nation in total offense at 578.75 yards per game, is third with 353.25 yards passing per game and is fifth in scoring at 44.08 points per game. But they continued to struggle defensively, giving up 513.92 yards and 38.17 points per game. This will be the first appearance in the Holiday Bowl for both teams. 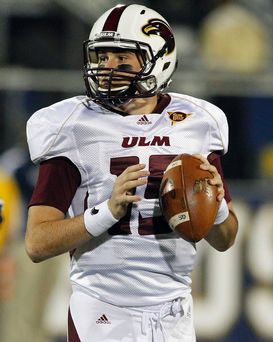 US PRESSWIREKolton Browning and Louisiana-Monroe are headed to the Independence Bowl.

The Sun Belt Conference's Warhawks will be playing in their first bowl game, and they'll be competing in a town that is a drive of less than two hours from Monroe. Todd Berry's squad, of course, had a standout victory over Arkansas in overtime and also suffered an overtime loss to Auburn this fall. The MAC's Bobcats, meanwhile, opened the year 7-0, including a season-opening victory at Penn State. But Frank Solich's squad lost four of its last five games. However, Ohio will still be playing in its fourth straight bowl. These schools, which will be meeting for the first time, are both led by standout quarterbacks. Kolton Browning of ULM has 2,830 passing yards and 27 touchdowns, while Ohio quarterback Tyler Tettleton has thrown for 2,513 yards and 16 scores. Bobcats running back Beau Blankenship is his partner-in-crime, as he recorded a school-record 1,500 rushing yards and 11 touchdowns this season.

This game has the potential to be four hours long because of all of the offense that is expected at Yankee Stadium. The Mountaineers had many wondering if a BCS bid was on the horizon after their season began with five consecutive wins, but the defense was too porous for Geno Smith and the offense to overcome. Syracuse, meanwhile, rallied from a 2-4 start to become bowl-eligible under head coach Doug Marrone. The Orange closed the year by going 5-1 to claim a share of its first Big East title since 2004. They took better care of the football in the second half and received nice production from tailback Jerome Smith, receiver Alec Lemon and quarterback Ryan Nassib. WVU fell to Syracuse last season when it played in the Big East, so the Orange won't be scared of the Mountaineers. Although we saw just how prolific this WVU offense can be last year in its Orange Bowl thrashing of Clemson.

Okay, so the two teams have a combined 12 losses. But what intrigues me is how USC's much-maligned defense will handle the GT triple-option attack as well as whether the Trojans will be motivated enough to show up and take care of business in El Paso. USC was ineligible for postseason play the last two seasons due to NCAA sanctions, but this was a season of immense expectations for the Trojans, and they failed to live up to them. Meanwhile, the Yellow Jackets are just happy to go bowling with a losing record. The Yellow Jackets lost to Florida State in Saturday's ACC Championship game but was granted a waiver for eligibility. GT came to El Paso last year and lost to Utah in overtime, and head coach Paul Johnson is still looking for his first bowl victory in Atlanta.

The Red Wolves finished the season as Sun Belt Conference champions after defeating Middle Tennessee State 45-0 on Saturday to put the finishing touches on a successful first season under head coach Gus Malzahn. They will now get set for a matchup with Darrell Hazell's Kent State squad at Ladd Peebles Stadium in their second straight appearance in Mobile. The Golden Flashes lost in double overtime to Northern Illinois in the MAC Championship game last Friday night but will still be making their first bowl appearance in 40 years. Kent State, which has won a program-record 11 games, is 0-2 all time in bowl games, including trips to the Refrigerator Bowl in 1954 and the Tangerine Bowl in 1972. Kent State is led by running backs Dri Archer (104 yards per game) and Trayion Durham (96 yards per game), while Arkansas State quarterback Ryan Aplin leads the nation’s 17th-rated offense, ranking 32nd in passing yards.