The future of Michigan's defensive line is bright

When Maurice Hurst Jr. committed to Michigan last Saturday afternoon, many Wolverine fans were ecstatic that second-year head coach Brady Hoke and defensive coordinator Greg Mattison were able to further add to a 2013 class that is stacking up as a Top 5 haul by most every major recruiting website in the nation.

However, some wondered if the commitment of the Xaverian Brothers High School (Westwood, MA) star, who is one of the better defensive tackles in the Class of 2013, would help fellow stud defensive tackle Henry Poggi of Gilman School (Baltimore, MD) decide to look elsewhere and commit to Alabama. After all, the top player in the state of Maryland was a teammate of 2012 Alabama signee Cyrus Jones and the Crimson Tide were recruiting him just as hard as the Wolverines.

Wolverine fans can exhale now, however, as Poggi pledged to the Maize and Blue on Monday, giving Michigan a pair of top notch defenders in a span of two days. And that Top 5 ranking for the 2013 class? It just became even stronger. 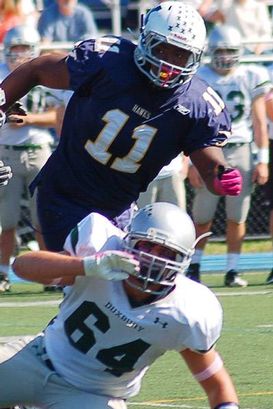 Adding defensive linemen like Maurice Hurst Jr. has been a priority for Brady Hoke.

In Hurst Jr., the Wolverines will get a player who is the top defender in the state of Massachusetts after he recorded 61 tackles, including 13.5 tackles for loss, and seven sacks last fall. The 6-2, 275-pounder is so athletic and versatile that he also notched 200 rushing yards in a game in 2011, including a 75-yard touchdown dash. Hurst Jr. projects as a nose tackle and a 3-technique in Ann Arbor. Playing close to the ground, he could ultimately find himself assuming the 1-technique role currently held by Will Campbell.

Poggi, meanwhile, is a 6-3, 245-pounder who also plays tight end in high school. He became the 20th commitment for Michigan in the Class of 2013 after visiting Ann Arbor this past weekend. And while he may project as a future DT at the next level, don't be surprised if he starts off as a 5-technique in Michigan's defense early in his career because of his athleticism and the fact that he needs to continue to add weight to his frame. Playing defensive end could get him on the field earlier as well before transitioning to the 3-technique spot inside. Ideally, he's a guy that Michigan can expect to eat up blockers so that a linebacker can come in and make a play.

After the team's spring game, Hoke expressed his disappointment in the team's lack of physicality up front along the D-Line. He wants more pressure, especially inside, and he said they were "way too soft in the middle." Granted, it was merely a spring game. But keep in mind that the Wolverines lost Mike Martin, Ryan Van Bergen and Will Heininger to graduation or the NFL Draft. Their strong play in 2011 allowed the linebackers more room to make plays, and the strong pass rush also helped out an inexperienced secondary.

The strength of this year's defense should be in the back seven, but that could be changing in future seasons as Hoke builds up strong depth along the defensive line. Because with Hurst Jr., Poggi and Charlton on board, Hoke is restocking the cupboard and giving his program a chance to remain deep in that area for years to come.