We're about halfway through the 2013 college football regular season, so let's take a look at the best two-loss teams in America.

Georgia: The Bulldogs' leaky defense is the reason why they are sitting with two losses. While he did turn the football over in Georgia's two defeats, Aaron Murray has done all he could do to put his team in a position to win each week. His strong play was the reason why the team was able to win big games against South Carolina and LSU despite the defense's struggles. There's no question that in the team's losses to Clemson and Missouri, the youth and inexperience were exposed on coordinator Todd Grantham's unit. 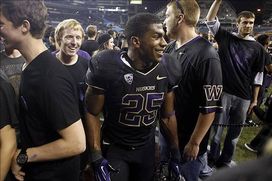 US PRESSWIREBishop Sankey is finally becoming a household name.

Washington: Steve Sarkisian's squad has dropped its last two contests against the two best teams in the Pac-12, Stanford and Oregon. But the Huskies had a chance to beat the Cardinal and were competing for much of the contest against the Ducks. Keith Price didn't have a great game this past week, but this team could still have a strong season if it puts the two losses in the rearview mirror.

Florida: The Gators can be a special team if they had any sort of an offense. That's how great the defense has played this season. But the team's lack of big-time playmakers was exposed this past week against LSU, and the Miami (FL) loss was an offensive disaster. Things won't get any easier either with tailback Matt Jones out for the year.

Notre Dame: The Fighting Irish will be back in action this week following their bye. They'll play host to a revived USC squad under the lights in South Bend. Tommy Rees is still a question mark at quarterback because of his propensity to turn the football over. He also has had a 45 percent completion percentage or below in his last three games. But the defense showed signs of life in the win over the Sun Devils.

Wisconsin: The Badgers very easily could have just one loss if they were able to close the deal in Tempe against Arizona State. Nonetheless, yet another Rose Bowl berth could be in store depending on what happens with Ohio State, which only beat Gary Andersen's squad by a touchdown. The win over Northwestern this past week was impressive, and I'm interested to see how the Badgers fare on November 9 when they step out of conference to take on BYU.

Others to consider in no particular order

Utah: The Utes notched perhaps the best win of any team this season when they defeated Stanford this past Saturday. This is a team that has an overtime loss to Oregon State and a seven-point loss to UCLA on its record. Both games were winnable.

BYU: The Cougars suffered through a bad loss to Virginia (played in inclement weather) and a seven-point loss to Utah. But the team essentially spelled the end of Manny Diaz at Texas, and it has wins over Utah State and Georgia Tech. The road test at Wisconsin will show how good this team can be by the end of the year.

Texas: Which Longhorns team will we see the rest of the season? The one that barely beat Iowa State or the one that pounded Oklahoma? Or something in between?

USC: We'll find out a lot about the Trojans when they travel to South Bend to take on Notre Dame this week. We saw how inspired the team was against Arizona last Thursday. Will depth issues work against Ed Orgeron's squad this week against the Irish?

Northwestern: The Wildcats must have been dealing with the hangover effect from their heartbreaking loss to Ohio State when they kicked off against Wisconsin this past weekend. That's the only way to explain how poorly they played in Madison. We'll have to monitor the health of Kain Colter and Venric Mark moving forward.