The secret to Dana Holgorsen's success

With the exception of Auburn's Gus Malzahn and new Florida head coach Will Muschamp, there wasn't a hotter name in the assistant ranks linked to head-coaching openings than Dana Holgorsen, who enjoyed his final game with Oklahoma State Wednesday night in the Alamo Bowl. The Cowboys' offensive coordinator is off to West Virginia to serve in the same role before becoming head coach in Morgantown in 2012. 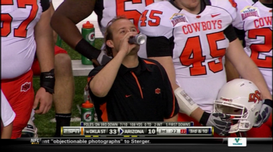 Dana Holgorsen has the right idea with his choice of beverage.

So how did his stock rise so fast? And how was his Cowboys offense so prolific in 2010?

Well, perhaps the secret to his success is in downing sugar-free Red Bulls, which he was doing Wednesday night in the game against Arizona.

It makes sense, right? Whenever we need that extra kick to get ready for a night on the town, isn't Red Bull always the go-to option? Sugar-free, of course, as it minimizes the pain the next morning.

You want a high-octane offense with star playmakers? Try a little Red Bull Vodka at your New Year's Eve celebration on Friday night.