The state of Oregon takes centerstage in Week 9

Eight weeks of the 2013 college football season are in the books, and the path to the BCS national title game continues to be a little fuzzy as several unbeatens continue to try to make their way to Pasadena.

Let's take a quick look at what could be in store for the best contests of Week 9.

Also, be sure to check out the Week 9 preview edition of the Against the Grain podcast.

Nebraska at Minnesota: The Cornhuskers will begin a stretch of six games in 35 days as they try to claim the Big Ten's Legends division title, while the Gophers are coming off of their surprising win at Northwestern last week. Ameer Abdullah, who is the Big Ten's second-leading rusher, will try to pace the Huskers offense against a rush defense that is allowing 151 yards per game on the ground in Big Ten play. We'll see if Taylor Martinez is back at quarterback for the Huskers after missing three games with a turf toe injury on his left foot. Tommy Armstrong Jr., who did not fare well through the air against Purdue, would get the start if T-Magic doesn't play.

Northwestern at Iowa: The Wildcats have been in a funk since their heartbreaking home loss to Ohio State when ESPN's College GameDay was in town, falling to Wisconsin on the road and Minnesota at home the last couple of weeks. Pat Fitzgerald's squad is still looking for its first Big Ten win. Meanwhile, Iowa has lost to Michigan State and Ohio State the last two weeks despite leading at halftime in both contests. The health of Kain Colter and Venric Mark has been a major concern all season long for the 'Cats. Mark will not play in this contest. Keep an eye on Iowa's Kevonte Martin-Manley, who leads the nation with a punt-return average of 25.8 yards per attempt. 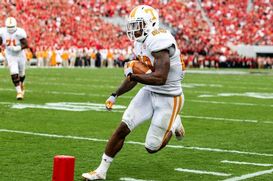 US PRESSWIRECan Rajion Neal and the Vols pull off another huge upset?

Tennessee at Alabama: After nearly knocking off Georgia at home, the Vols were finally able to end their losing streak against Top 25 teams with a victory over South Carolina last week. Meanwhile, the Crimson Tide will be playing their final game before their high-profile matchup with LSU in two weeks. Nose guard Brandon Ivory, linebacker C.J. Mosley and the Crimson Tide defense are allowing just 98.3 yards per game on the ground, but the Vols' strong offensive line has protected quarterback Justin Worley well and opened up lanes for running back Rajion Neal and Co. Can Worley continue to play well and find freshman receiver Marquez North against a 'Bama secondary that has some issues?

NC State at Florida State: The Wolfpack are looking for their first ACC win of the season and their third victory over the Seminoles in the last four years. Dave Doeren's team has given up 18 sacks this fall, so the Seminoles' front seven will be looking to replicate its strong play from last week against Clemson. The Wolfpack will be getting back quarterback Brandon Mitchell from his broken left foot, but will he be protected? And will he be able to move the football against Lamarcus Joyner, Jalen Ramsey and that 'Noles secondary?

Clemson at Maryland: The Tigers are looking to put their ugly loss to Florida State in the rearview mirror when they travel to College Park to take on the wounded Terrapins. Not only have the Terps taken a step back defensively, giving up 123 points in the last three games, but they are decimated on offense. Top receivers Stefon Diggs and Deon Long have been lost for the season, so the pressure will be on Levern Jacobs and Amba Etta-Tawo to step up.

Texas Tech at Oklahoma: The Red Raiders are unbeaten under first-year head coach Kliff Kingsbury, but they will face the first of many tests the rest of the way as they travel to Norman, where Tech is 1-6 against OU head coach Bob Stoops. Kingsbury has worked wonders with two freshmen quarterbacks this season, as Baker Mayfield and Davis Webb lead an offense that is averaging 416.4 yards per game through the air. However, the Sooners lead the country in pass defense, allowing just 149.7 yards per game. Kingsbury has not named a starting quarterback for this contest.

Duke at Virginia Tech: The Hokies have not lost since their season-opener against Alabama, while the Blue Devils need one more win to become bowl eligible for the second consecutive season. Can the Hokies continue to stay hot to set up a likely Coastal division title game at Miami (FL) on November 9? They will be tested by the Blue Devils' balanced offense led by quarterbacks Anthony Boone and Brandon Connette, who often enters on run plays but is also effective off of play-action. However, Bud Foster's defense is strong against both the run and the pass.

Utah at USC: The Trojans have major injury concerns, especially at receiver and tight end. Defensive depth also remains a concern from week to week. But Utes dual-threat quarterback Travis Wilson is uncertain to play in this one with a right hand injury, and Kyle Whittingham's team has had some road struggles. The Pac-12 South division is still anyone's to run with over the season's final six weeks. Ed Orgeron's squad was unable to convert its final 11 third down-conversions in last week's 14-10 loss at Notre Dame, and it will be tough to have any more success this week with Xavier Grimble, Randall Telfer and Justin Davis all out. Wilson could still play for the Utes. If he doesn't, sophomore Adam Schultz will get the call.

UCLA at Oregon: The Ducks continue to play their back-loaded second-half schedule when they host the Bruins. Meanwhile, Jim L. Mora's squad is looking to bounce back from its 24-10 loss at Stanford last week. As is always the case in any game involving the Ducks and their high-powered, up-tempo offense, can they be contained? The Ducks rank second nationally at 643 yards of total offense per game, and quarterback Marcus Mariota has yet to throw an interception. The Bruins are giving up an average of 147 yards per game on the ground, and Ducks star athlete De'Anthony Thomas is expected to return after missing the last three games with a right ankle injury. A lot will be on the plate of Bruins dual-threat quarterback Brett Hundley.

South Carolina at Missouri: It's homecoming for Gary Pinkel's squad, and who would have thought that the Tigers would control their own destiny in the SEC East at this point of the season? The key matchup should be the Gamecocks' defensive line against the Tigers' offensive line, which will try to protect quarterback Maty Mauk and open up holes for the deep stable of running backs. Mizzou ranks second in the SEC in rushing and third in passing, and the Gamecocks have not been very good against the run. Defensively, Mizzou boasts one of the best lines in the country, and Connor Shaw is expected to miss this game. Dylan Thompson should start at quarterback for the Gamecocks.

Texas at TCU: The Longhorns will play in Fort Worth for the first time since 1994, and they are coming off of their bye week following their Red River Rivalry win over Oklahoma. To protect quarterback Case McCoy, the 'Horns must make the run game a priority . Johnathan Gray is second in the Big 12 at 118 rushing yards per game, but the Frogs lead the Big 12 in rush defense at just 115 yards per contest. Loosening up that TCU front with a strong run game will allow McCoy to take shots down the field to Mike Davis and Jaxon Shipley. For the Frogs, Casey Pachall could see some action.

Penn State at Ohio State: All expectations are that the Buckeyes will cruise the rest of the way until they face Michigan in the regular-season finale. But the Nittany Lions have already defeated that same Michigan team, and they'll get a chance to notch the biggest win of the Bill O'Brien era Saturday night at the Horseshoe, where they'll face a Buckeyes team that has won 19 in a row under second-year head coach Urban Meyer. Nittany Lions freshman signal-caller Christian Hackenberg will have a chance to make plays along with receiver Allen Robinson and running back Bill Belton against a Buckeyes defense that did not play that well in the win over Iowa last week. Hackenberg leads the Big Ten in completions and passing yards per game, but he should face some unique looks from the Buckeyes.

Stanford at Oregon State: The Cardinal bounced back from their loss to Utah with a win over UCLA last week, and David Shaw's squad will continue to keep its faint BCS title hopes alive with a win in Corvallis against a Beavers team that will begin a grueling stretch of games. Sean Mannion, who cracked the Top 5 of my Heisman Watch this week, leads the nation's top-ranked passing offense and has thrown for 350 or more yards in a school record seven straight games, will face a defense that is stout despite not playing as well as it did last season. The Cardinal are allowing opponents to throw for 247.1 passing yards per game, but strong safety Jordan Richards intercepted two passes and broke up another last week in the win over UCLA.