It’s been a disappointing season for Georgia Tech, which finished 6-6 one year removed from an appearance in the Orange Bowl. 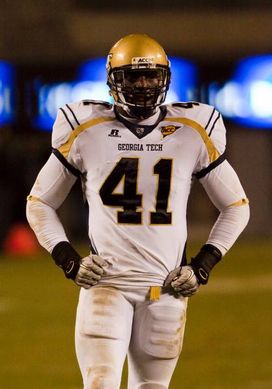 ICONStarting OLB Anthony Egbuniwe will miss the first half of the Independence Bowl.

And any hope of building momentum for 2011 is fading fast as three more players face suspension for Monday’s Independence Bowl against Air Force in Shreveport, La.

Starting outside linebacker Anthony Egbuniwe, along with reserve defensive backs Michael Peterson and Louis Young, will miss the first half of the game against the Falcons for missing curfew on Friday night.

The senior Egbuniwe started 12 games this season and ranked fifth on the team in tackles with 59. Edwards, also a senior, was Tech’s third-leading tackler with 68. He started every game this season.