Time is running out for the Pastor of Pass Rush

Ray Drew Jr. gave his first sermon in front of a congregation when he was in eighth grade — an impressive feat for any young man — and he’s on his way to becoming an ordained minister.

But the 6-5, 243-pounder from Thomas County Central (Thomasville, Ga.) is also the No. 1-ranked weakside defensive end in the country. 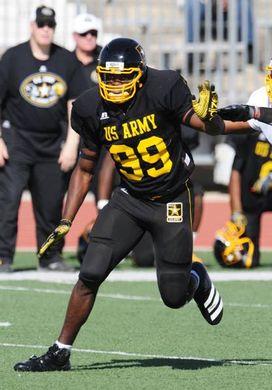 ICONRay Drew Jr. is frustrating many recruiting analysts who are clamoring to know where he will sign.

Drew has been compared to the late Reggie White, who was nicknamed the Minister of Defense because of his dual responsibilities as a fierce NFL pass rusher and an ordained minister. But no one can replicate the feats of White, which is why Drew prefers another nickname: The Pastor of Pass Rush.

And while he is certainly committed to his faith, he is still not committed to one of the many programs seeking his services as teams finalize their 2011 classes. Drew’s final four schools are believed to be Auburn, Georgia, LSU and Miami.

You can bet his spirituality will play a big part in his final decision.

It’s been difficult to get a read on where Drew may be heading as National Signing Day nears on Feb. 2. Recruiting analysts have tried, but Drew has been successful in keeping everyone on their toes — including the coaching staffs seeking his services.

Drew is set to announce his decision on Friday. While recruiting is often an unpredictable business, I've always felt that he'd sign with Georgia and add to head coach Mark Richt's much-needed loaded class this season. Friend and rival Christian LeMay, a Georgia quarterback commit from North Carolina who enrolled early, has tried to woo him to Athens.

One school he won’t be attending is Clemson, as he eliminated the Tigers following his official visit there this past weekend. Then again, maybe he has been bluffing about his finalists the whole time. Check out the Facebook status that he posted late Monday evening.

“There will be a huge surprise on Friday…no Auburn, no Georgia, no LSU…time to shock the world baby!,” he wrote.

Does that mean Al Golden is going to pick up a huge commitment in his first season at Miami? Or will Drew continue his trend of unpredictability and choose Florida or USC or UCLA — schools he liked late in the process but never actually visited?

At the end of the day, Drew will do what’s best for himself and his family. And he'll continue on the path the Lord has set out for him.