Time to put on your bowling shoes

Finally, after seemingly a month of inaction, college football’s 2010-11 bowl season kicks off Saturday with three matchups — all of which have intriguing storylines.

These two teams are trending in opposite directions.

After an opening win against Jake Locker and Washington, BYU dropped four straight to put itself in a 1-4 hole. While the Cougars fell to Air Force, Florida State and Nevada, a Friday night loss to Utah State had many believing that BYU was in store for one of its worst years in program history. But Bronco Mendenhall righted the ship, as the Cougars won five of their next six before falling by one point in the regular-season finale at Utah. The only other loss came on the road to TCU. And for the sixth straight season, Mendenhall has BYU in a bowl game.

Perhaps the biggest reason to be optimistic about the BYU program is quarterback Jake Heaps, the true freshman who stepped in full-time when Riley Nelson went down to injury following the Florida State loss. Heaps had his ups and downs, and he was asked to do too much early — attempting 99 passes in his first two starts was absurd. But he led the team to a win over San Diego State and took advantage of inferior competition, which is what the Cougars needed to do in a transition year under center. Over his last four games, Heaps completed 74 of 120 passes for 995 yards with 9 touchdowns and just one interception. 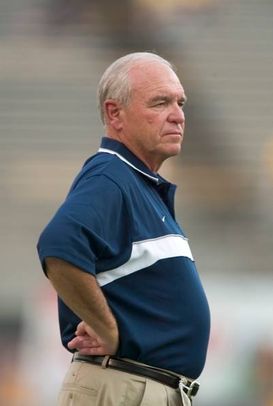 ICONMike Price's Miners are going bowling for the first time in four years.

UTEP, meanwhile, struggled since opening the season 5-1. And the Miners should be thankful that their conference bowl tie-in earned them a spot in the postseason. They lost five of their last six, and their only signature win was against SMU — a much-needed victory that snapped a three-game losing streak and clinched bowl eligibility for Mike Price’s group after a four-year absence. In that three-game skid: losses to UAB, at home to Tulane and at Marshall. Despite returning the team to the postseason, Price hasn’t done enough with that program in El Paso.

The Miners could have the home-field advantage in this one, as Albuquerque is about a four-hour drive from campus. And they seem excited for this game, especially going up against a storied program. Quarterback Trevor Vittatoe has had an up-and-down senior campaign, but he is one of the tougher signal callers in the nation, as he played hurt most of the season. And his ankle hasn’t improved very much. His top target — and only legitimate threat — is Kris Adams, who led the Miners with 44 receptions for 917 receiving yards and 11 touchdowns.

These former WAC rivals will meet for the first time since 1998, and BYU has won 25 of the past 27 meetings between the two schools. Both teams should run the ball effectively, but it will come down to turnovers. And while Vittatoe is the more seasoned of the two signal callers, I worry about his ankle. Plus, I like how Heaps has matured over the course of the year.

Even with Northern Illinois operating under interim head coach Tom Matukewicz following the departure of Jerry Kill to Minnesota, the Humanitarian Bowl could be one of the season’s most underrated non-AQ games. Matukewicz, who will remain on new head coach Dave Doeren’s staff as linebackers coach following the game, will lead the MAC West-champion Huskies against Pat Hill’s Fresno State squad.

The Huskies are led by running back Chad Spann, the MAC offensive player of the year after breaking the school record for single-season rushing touchdowns with 20. The 5-9, 198-pound senior racked up 1,293 yards and averaged 5.3 yards per carry, pacing the nation’s No. 7 rushing attack.

After a 1-2 start, NIU won at Minnesota to start its nine-game winning streak before losing to Miami (OH) in the MAC title game. Much of the success of the offense had to do with the steady play of Chandler Harnish under center. The dual-threat signal caller tossed 20 touchdowns against just 5 interceptions, and he’s rushed for at least 70 yards on five occasions.

How will the Huskies respond after losing a heartbreaker in the league title game, especially playing under an interim head coach without the team’s offensive and defensive coordinators, who joined Kill with the Gophers? The first quarter should be telling as the Huskies try to win their program-record 11th game. 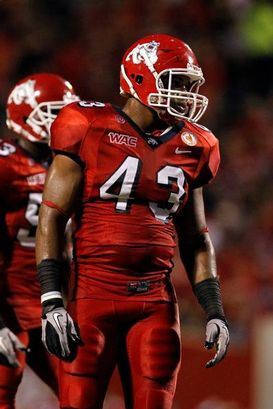 ICONFresno State's Chris Carter was the WAC defensive player of the year.

Meanwhile, Fresno State defensive end Chris Carter could make it difficult on Harnish and the NIU offense. The WAC defensive player of the year led the conference in sacks with 11, and he tied for second in the league in tackles for loss with 16.5 and forced four fumbles. Logan Harrell isn’t bad, either, as the defensive tackle recorded 11 sacks and teamed with Carter to form an aggressive pass rush. The Huskies must establish the run in this one because they don’t want to put Harnish in a position where he has to win the game by himself against two established pass rushers.

Starting weakside linebacker Kyle Knox is one of three Bulldogs who have been suspended for this game, along with backup linebacker Daniel Salinas and reserve receiver Matt Lindsey, for an unspecified violation of team rules. Junior Shawn Plummer, who appeared in all 12 games and has 27 tackles, is expected to start in Knox's absence.

Despite his struggles against Hawaii and Boise State, Bulldogs quarterback Ryan Colburn will provide a tough test for NIU’s secondary. But it’s running back Robbie Rouse who will be the most fun to watch in this one. The 5-7, 185-pound sophomore has rushed for 1,097 yards and 8 scores on the season, averaging 5.7 yards per carry. And while he may be difficult to find on the television screen because of his diminutive nature, he is the motor for this Fresno offensive attack.

Hill’s squad has lost its last two bowl games, both in the New Mexico Bowl. It’s tough to pick against the NIU program because it’s consistently solid, but so are the Bulldogs. I’ll take the more-cohesive staff.

Troy earned its third straight bowl appearance and fifth in its last seven seasons, including two previous trips to New Orleans. The Trojans clinched at least a share of the Sun Belt Conference for a fifth straight season, finishing tied with Florida International atop the league standings. Despite a poor four-game stretch in the middle of the season, Larry Blakeney’s squad persevered and earned a trip to this game.

While the Trojans’ regular season ended on a positive note, Ohio’s regular season concluded with disappointment. After losing three of its first four, Frank Solich’s Bobcats entered the finale on a seven-game winning streak and a chance to claim its third MAC East division title in five seasons. The Bobcats just needed to beat an average Kent State squad. However, the Golden Flashes stunned the Bobcats 28-6 as the offense was held in check. Ohio will need to turn the page on that disappointing loss if it wants to capture its first bowl victory in school history. 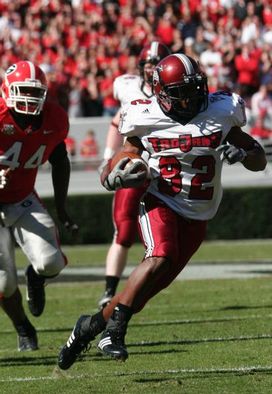 ICONJerrel Jernigan will finish his career as the record holder for receptions, yards and all-purpose yards at Troy and in the Sun Belt.

Levi Brown is no longer under center for Troy, but the standout quarterback was replaced by a redshirt freshman who picked up the offense and kept it prolific. Corey Robinson threw for 3,339 yards and 24 touchdowns while completing over 62 percent of his throws, earning second-team Sun Belt and freshman of the year honors. Of course, it helps having the explosive and talented Jerrel Jernigan at receiver. Jernigan will finish his career as the record holder for receptions, yards and all-purpose yards at Troy and in the Sun Belt. In 2010, he led the team with 77 receptions and 774 yards while grabbing five touchdowns. Plus, he’s a dangerous kick returner. Yeah, he truly does it all.

And don’t sleep on the Troy rushing attack, either, as it averages over 150 yards per game with Shawn Southward and DuJuan Harris leading the way.

Troy’s defense has been spotty at best, but at least it knows what Ohio wants to do: run the football and run some more. Problem is the Trojans have allowed 170.8 yards per game and 26 touchdowns.

Jackson, however, completed just over 60 percent of his throws and has tossed 16 interceptions on the year. He must keep Troy’s defense honest and move the chains through the air when necessary.

The three games Saturday may not be the marquee matchups we grew up watching, but they all present intriguing aspects worth monitoring over a couple of beers while wrapping Christmas gifts.