T-Magic poised to continue his ascent at Nebraska

Taylor Martinez has been through a lot of ups and downs during his career at Nebraska.

The Corona, CA, native burst onto the national scene in 2010 as a redshirt freshman starter, displaying his dual-threat abilities for a Thursday night national television audience in a 48-13 win at Kansas State -- an early October contest in which he ran for 241 yards and four touchdowns on 15 carries. The "T-Magic" hype machine was just beginning to pick up steam. 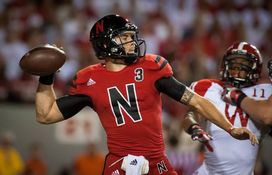 Taylor Martinez is poised to build off of an impressive 2012 campaign.

But despite being lauded for his passing in high school, Martinez did not excel through the air during his first two seasons as a starter. He struggled with his accuracy, did not execute all of his reads to perfection and was plagued by turnovers.

However, in Tim Beck's offense last fall, Martinez made huge strides, as he completed 62 percent of his passes for 2,871 yards and 23 touchdowns. And while he did toss 12 interceptions, his ability to shake off his mistakes and rally his team in the second half helped lead the Cornhuskers to an eventual spot in the Big Ten title game.

Unfortunately, most everyone associated with the Huskers program would like to forget about that debacle against Wisconsin on the first Saturday in December.

But entering his second season in Beck's offense, Martinez is poised to build off of a career year and lead what should be one of Nebraska's most exciting offenses in years. And a lot of the damage is expected to be done through the air, which is a far cry from how the Huskers moved the ball when Martinez first won the starting gig in 2010.

On the Big Ten spring teleconference Wednesday, Martinez said he expects the team to throw the ball "a lot more" this season because of the depth at wide receiver, a position headlined by Kenny Bell and Jamal Turner. He said that the expectations are extremely high for the offense because Beck is more comfortable as the play-caller. And the players know what to expect as well.

So is an increased emphasis on the passing game something that Martinez embraces? You bet.

"I'd rather throw the ball 30 times a game…get the football to those guys and let them do their thing," Martinez said.

And that's exactly how head coach Bo Pelini envisions the offense playing out in the fall, saying on Wednesday that "the best is yet to come" for Martinez.

However, the major issue facing this offensive unit is its propensity to turn the football over. Only Idaho turned the ball over more in the FBS last fall than Nebraska, which gave it away 35 times, including leading the country with 22 lost fumbles. Ball security was a major emphasis this spring, including for Martinez, who often was able to overcome his miscues in 2012 but must get better at ball protection if the Huskers have any designs on reaching the Rose Bowl.

Yet despite all of the unforced errors last fall, Nebraska was still able to put up nearly 35 points and over 460 yards per game. With Martinez, 1,000-yard running back Ameer Abdullah and depth at receiver, the expectations are high in Lincoln for 2013.

With Martinez continuing to improve his decision-making and the team stressing better ball security all around, the Huskers should boast one of the best offenses in the nation when fall rolls around.

And a lot of that success will be predicated on the magic emanating from under center.