No matter where Neal lands, it's time to look ahead to next year's top recruits. So let's take a peek at the top defenders (as of their junior seasons) who help comprise the Class of 2013.

He may not project to be quite the talent as South Carolina's Class of 2011 star Jadeveon Clowney, but he could have a similar sudden impact. Nkemdiche recorded 19 sacks as both a sophomore and a junior, and he led his team to a state championship in 2011. He visited Georgia over the weekend, though the home-state Bulldogs weren't in his top five schools entering the weekend. Those programs are thought to be Alabama, Oregon, LSU, Florida and Florida State. Meanwhile, older brother Denzel Nkemdiche just completed his freshman season at Ole Miss.

Foster, an Alabama commit, notched 144 solo tackles, 32 tackles for loss and 14 sacks during his junior season. He's one of the nation's best all-around defenders with good size and speed, and he plays with an unmatched intensity that will have college coaches drooling.

Adams notched 45 tackles for loss in 2011 and starred in an all-star game for juniors this past postseason. He has offers from Alabama, Auburn and Georgia, but he currently favors Clemson because the Tigers’ coaching staff offered him first.

Cravens notched 100 tackles, 11 sacks and three interceptions in 2011, and he was at USC's junior day over the weekend. Many believe he will become a Trojan, but he has roughly 40 scholarship offers. He's so athletic that he ran for 15 touchdowns and caught four last year, so whoever lands him will be getting an exceptional athlete.

Fuller recorded 26 tackles and three interceptions on defense and caught 26 passes for 527 yards and five touchdowns as a receiver during his junior season. Former teammate Stefon Diggs received a lot of attention before his commitment to Maryland last Friday, but Fuller's recruitment could surpass that hype next February.

Hargreaves notched two interceptions and accounted for 11 touchdowns in his junior season. Michigan, Florida, Florida State, Notre Dame, Ohio State and USC are among the major programs to extend an offer.

Hutchings recorded 56 tackles and two sacks on a dominant De La Salle defense — one of the school’s best in its history. The athletic Hutchings can play both outside linebacker and strong safety, allowing him to cover a slot receiver or tight end effectively.

Bigelow, who is currently committed to USC, finished his junior season with 15 sacks. He can play all over the line but was recruited by Ed Orgeron as a defensive tackle.

Thomas made 117 tackles and notched 13 sacks as a junior, and there may not be a more talented defensive player in the state of Florida. He can pay DE, LB or safety, and he plays the pass as well as anyone. 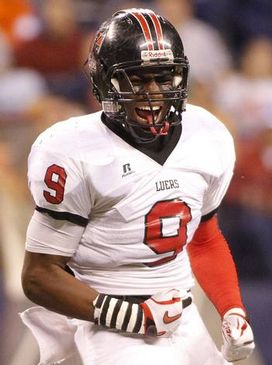 LB Jaylon Smith is one of the best defenders in the Class of 2013.

Burrows had 46 tackles, 12 pass breakups and four interceptions for an undefeated squad this past season.

Vanderdoes recorded 59 tackles and eight sacks as a junior.