There’s still a lot of uncommitted talent deciding where they want to attend school, so be prepared for an exciting National Signing Day. And, of course, high school kids are flip-floppers by trade so expect some decommitments to shake up the rankings as well.

Here is the current Top 25:

1. Alabama: The Crimson Tide sit solidly at No. 1 after receiving verbal commitments from defensive back Landon Collins and athlete Cyrus Jones at their recent all-star games. Getting T.J. Yeldon to flip from Auburn gives Nick Saban’s program the edge as we head into National Signing Day. And as the BCS national champions, don't expect the Tide to lose their grasp on No. 1.

2. Texas: The Longhorns once again have a star-studded haul with running back Johnathan Gray and receiver Cayleb Jones ready to help Bryan Harsin’s offense. And Connor Brewer eventually could be the tonic for the Longhorns’ woes at the quarterback position. 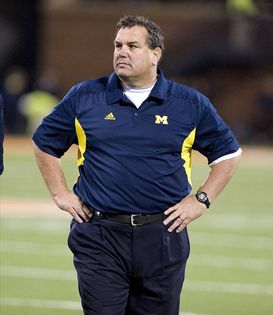 ICONBrady Hoke has done a remarkable job in his short time as Michigan head coach.

3. Michigan: Brady Hoke has pressed all the right buttons since his return to Ann Arbor, taking his team to a Sugar Bowl in his first year and now putting together a Top 5 class in his first full recruiting cycle. Offensive linemen Kyle Kalis and Erik Magnuson lead the way, and defensive back Terry Richardson should help the secondary continue to improve.

4. Ohio State: An Urban renewal? That’s what is occurring in Columbus since former Florida head coach Urban Meyer took over the program. Defensive end Noah Spence headlines the haul, but fellow defensive linemen Tommy Schutt and Sevon Pittman flipped from Penn State and Michigan State, respectively, on the same evening recently to move this class up into the Top 5.

5. Florida: Meyer’s old team is in good hands with Will Muschamp, who is looking to improve on a six-loss debut campaign. Running back Matt Jones and tight end Kent Taylor should add firepower to the offense, and offensive linemen D.J. Humphries and Jessamen Dunker add strong depth to a position of need.

6. Florida State: The Seminoles once again have compiled a Top 10 class as the recruiting magic continues under Jimbo Fisher. Defensive end Mario Edwards is the gem of the class — he’s arguably the best player at any position outside of receiver Dorial Green-Beckham. Fellow end Chris Casher and tackles Justin Shanks and Dante Fowler will give defensive coordinator Mark Stoops even more weapons. The big question is whether quarterback Jameis Winston will ever see the football field, as he’s one of the top baseball prospects in the country.

7. Miami (FLA): Al Golden has managed to put together a very large and deep class despite the presence of an NCAA investigation in Coral Gables. Twenty-eight commits are currently headed to Miami, and running back Duke Johnson and receiver Angelo Jean-Louis lead the way. The ‘Canes will also bring in three quarterbacks as well as top defenders Deon Bush and Jelani Hamilton, a defensive back and defensive lineman, respectively.

8. Texas A&M: New head coach Kevin Sumlin inherited a very strong class, and he’s primed to keep most of it intact. Running back Trey Williams and quarterback Matt Davis lead the way, and Davis is already on campus. Outside linebacker Jordan Richmond is the best recruit of the bunch, however, and five defensive linemen are also on their way to College Station.

9. Clemson: The Tigers received instant impact from receiver/returner Sammy Watkins last fall, and Dabo Swinney could get similar production from defensive back Travis Blanks on the other side of the ball next fall. Swinney has focused on both sides of the line of scrimmage this cycle as well as the secondary. He also added Hall of Fame quarterback Jim Kelly’s nephew, fellow signal-caller Chad Kelly.

10. Oklahoma: The Sooners’ top recruits are running back Alex Ross and four potential impact receivers — Durron Neal, Derrick Woods, Trey Metoyer and Sterling Shepard. There aren’t too many standout defenders, so new defensive coordinator Mike Stoops will be working with what they already have in Norman.

12. Notre Dame: The Fighting Irish were the beneficiary of Kiel decommitting from LSU, as the Indiana native is in South Bend as an early enrollee. Brian Kelly has once again made defense a priority, grabbing tackles Jarron Jones and Sheldon Day and locking up defensive back Tee Shepard.

13. South Carolina: Steve Spurrier did his best coaching job yet in Columbia last season, and he’s put together yet another strong class, one led by cornerback/receiver Shaq Roland. Roland’s commitment once again shows that Head Ball Coach is doing a good job of keeping the best players from the state at home. Receivers Jody Fuller and Kwinton Smith also add firepower to the Gamecocks’ offense.

14. Georgia: After putting together a “Dream Team” last February, Mark Richt has the Bulldogs positioned for another strong haul. Keith Marshall is arguably the nation’s best running back, and John Theus is considered by many to be the top offensive tackle. The defensive line is also well-stocked.

15. Cal: The Golden Bears enjoyed the biggest recent surge due to receiving commitments from three top recruits at the U.S. Army All-American Bowl: receiver Jordan Payton, defensive lineman Ellis McCarthy and safety Shaq Thompson. But Jeff Tedford has since lost McCarthy to UCLA, and he could lose Payton and Thompson because of the departure of top recruiter Tosh Lupoi to Steve Sarkisian’s staff at Washington. Lineman Freddie Tagaloa and quarterback Zach Kline, however, lead an offensive haul that also features receivers Darius Powe and Bryce Treggs.