Earlier this week I released my post-spring way-too-early bowl projections for the 2014-15 college football postseason covering all 39 games.

Today, let's take a closer look at what I deem to be the top contenders for the four spots in the first-ever College Football Playoff.

As always, I will continue to study these programs throughout the summer months. But, as of now, these teams could have the best shot at snagging a spot in the CFP.

Note: As a reference point, here are my projections from earlier in the week. And keep in mind that one team from the so-called Group of Five (American Athletic, MAC, Mountain West, Conference USA and Sun Belt) will get chosen for either the Cotton, Fiesta or Peach Bowl. 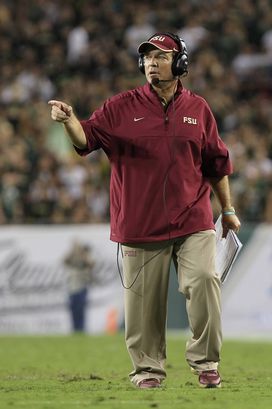 US PRESSWIREAre Jimbo Fisher and the 'Noles well-positioned to make it into the first-ever College Football Playoff?

Florida State: The Seminoles have 14 starters back from last season's squad that won the final BCS national title, including reigning Heisman Trophy winner Jameis Winston at quarterback. Jimbo Fisher's team should be able to retain its prolific ways on offense despite losing some weapons, and there is plenty of talent such as Mario Edwards Jr., Ronald Darby and Jalen Ramsey on the defensive unit now led by coordinator Charles Kelly.

Auburn: Quarterback Nick Marshall will probably make every preseason Heisman Trophy watch list because he had a very strong spring in which he continued to develop more fully as a passer in Gus Malzahn’s no-huddle offense. And JUCO transfer D’haquille Williams brings game-breaking ability to the receiver position. On the defensive side of the ball, coordinator Ellis Johnson was the best assistant hired last offseason and has a lot of really good material to work with on The Plains.

Oregon: Mark Helfrich and the Ducks need to solve their “Stanford problem” this season if they want a shot at the CFP. Heisman Trophy-contending quarterback Marcus Mariota is back and healthy, but No. 1 receiver Bralon Addison tore ligaments in his knee and his status is very much uncertain. Running backs Thomas Tyner and Byron Marshall form a strong 1-2 punch, but how will the defense fare with longtime underrated defensive coordinator Nick Aliotti now retired and Don Pellum taking over? Pellum, who has been in Eugene for 21 seasons and will continue to coach the inside linebackers, will do just fine as the Ducks look to find more unique ways to attack the quarterback.

Ohio State: Quarterback Braxton Miller returns after missing spring with an injured shoulder, and he should be even more effective in Urban Meyer's Power Spread offense with more playmakers emerging to support him this fall. Defensively, the line is one of the best in the country. And all expectations are that the skilled defensive backs brought in the last few years should benefit from a more aggressive scheme under new co-defensive coordinator Chris Ash.

Alabama: Nick Saban and the Crimson Tide were able to reel in Jake Coker from Florida State as the heir apparent to three-year starting quarterback AJ McCarron, and it's a much-needed boost to a position that needs help despite Blake Sims’ solid spring before an underwhelming spring game under new offensive coordinator Lane Kiffin. T.J. Yeldon, Derrick Henry and Amari Cooper are some of the best players at their positions nationally, but can the defense find a better pass rush in addition to dependable cornerbacks?

Michigan State: The defending Big Ten champion Spartans lost a lot of top talent on defense, such as cornerback Darqueze Dennard and linebackers Max Bullough and Denicos Allen. However, coordinator Pat Narduzzi is one of the best DC’s in the country, and Shilique Calhoun, Marcus Rush and Kurtis Drummond are future pros. On offense, quarterback Connor Cook will only continue to improve, and running back Jeremy Langford is one of the best in the country.

Oklahoma: One of the most intriguing storylines to watch in the fall is whether the Sooners will get consistent play each week from quarterback Trevor Knight, who broke out in a big way in the team’s Sugar Bowl win over Alabama. While Bob Stoops' team did not look elite in losses to Texas and Baylor, OU did finish 2013 with back-to-back wins over rival Oklahoma State and the Crimson Tide. Knight had a good spring, but he had a bit of a rough spring game. Is Joe Mixon the next star running back in Norman? The defense returns a lot of experience, and the unit really improved last year despite depth issues as the season wore on.

UCLA: Quarterback Brett Hundley highlights a boatload of returning starters for the Bruins, including an offensive line that continues to grow and improve, the team’s top four rushers from 2013 and a strong crop of receivers. It's never easy losing an All-American linebacker like Anthony Barr, but Myles Jack and the entire secondary will be back, and end Owamagbe Odighizuwa returns after missing 2013 with a hip injury.

Notre Dame: Despite the fact that Malik Zaire was impressive throughout the spring, I believe that Everett Golson is poised for a huge season after working with quarterback guru George Whitfield. There are more playmakers on offense, and head coach Brian Kelly is expecting the 'O' to carry more of the load because the defense lost some key pieces. New defensive coordinator Brian VanGorder has the tough task of finding ways to dial up more pressure on opposing quarterbacks.

LSU: Another year, another rash of underclassmen declaring early for the NFL Draft for Tigers head coach Les Miles. The offense will be young, as Leonard Fournette will have a chance to be the top running back while Malachi Dupre and Trey Quinn may get long looks at receiver as the team looks to replace Odell Beckham Jr. and Jarvis Landry. The big question is who will win the quarterback battle between Anthony Jennings and Brandon Harris. Eyes will also be on defensive coordinator John Chavis, who will need to help develop all of the top talent that the program has been able to bring in the last few years on that side of the ball.

Clemson: Replacing Tajh Boyd, Sammy Watkins and Martavis Bryant is difficult. But future head coach Chad Morris is still running the show on offense, and rising senior Cole Stoudt is more than capable of le ading the unit (as well as true freshman Deshaun Watson, who could easily see the field in 2014). The most intriguing aspect of the 2014 Tigers is the fact that the defense could actually overshadow the offense. End Vic Beasley is the standout of a unit that recorded 14 sacks in the spring game.

How will the first-ever College Football Playoff look this season? While it remains to be seen, it is quite possible that it will involve four of the teams mentioned above. Here are a few more teams that could be fighting for a spot at the party.

— Georgia: The Bulldogs have confidence in rising senior Hutson Mason at quarterback, and he's surrounded by a ton of skill players. The biggest addition for the 'Dawgs has been new defensive coordinator Jeremy Pruitt.

— Baylor: Art Briles’ team doesn't return a ton of starters, but quarterback Bryce Petty and receiver Antwan Goodley lead what should be another exciting offense despite some questions along the offensive line. If the defensive line holds up, do not dismiss the Bears as the team to beat in the Big 12.

— Stanford: Never overlook a David Shaw-coached team, and quarterback Kevin Hogan has a chance to take a big step forward after failing to do so in 2013.

— South Carolina: Steve Spurrier looks to lead the Gamecocks to their fourth straight 11-win season behind senior quarterback Dylan Thompson. The biggest question is whether the team can get immediate impact performances from freshmen cornerbacks.