As we continue to wrap up National Signing Day coverage, let's take a look at the programs that brought in the most impressive haul of defensive talent on a position-by-position basis.

Florida State landing the uncommitted Eddie Goldman on Signing Day to pair with Justin Shanks could have put the Seminoles at No. 1, and FSU unquestionably could lead the way if Mario Edwards moves inside from end. But I'm going to give the top nod to the Longhorns. Three-technique Malcolm Brown headlines this group after showing off his athleticism and quick first step during the Under Armour All-America Game, and Alex Norman lost more than 50 pounds since his freshman year to earn an invitation to the Under Armour All-American game as well. Brandon Moore is a junior-college star who should make an immediate impact in Austin after playing in four games as a freshman on the 2009 Alabama national championship team that defeated Texas. More weapons for coordinator Manny Diaz, which is a scary thought for Big 12 offensive linemen.

Florida brought in a top class that was helped by the addition of Dante Fowler, Jr., who flipped from Florida State on Signing Day. But Urban Meyer certainly brought in an SEC-type defensive line to Columbus, as Ohio State landed two top ends in Noah Spence and Adolphus Washington. They are speedy pass rushers who could give Big Ten offensive lines fits for years to come. Spence's commitment was even more impressive considering that Ohio State wasn't even on his radar until Meyer contacted him. Se'Von Pittman, who was once a Michigan State commit, should also see action right away. Meyer's short-term impact has been evident, and he's only going to continue to show his recruiting prowess. 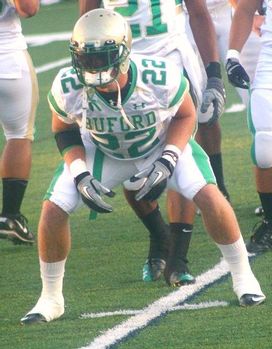 Dillon Lee is part of a strong linebacker corps being brought into Tuscaloosa by Nick Saban.

Texas could easily assume the top spot, especially after stealing Dalton Santos from Tennessee and Torshiro Davis from LSU. But Nick Saban was able to reload his linebacker corps to get ready for future stout 3-4 defenses. Reggie Ragland, Dillon Lee and Denzel Devall are arguably Top 10 players nationally at their inside/outside postions, giving the Tide quality defenders to step in for the departing Courtney Upshaw and Dont'a Hightower. The rich get richer.

It was difficult not to pick Alabama here, especially wth top safety Landon Collins, U.S. Army All-American cornerback Geno Smith and junior-college star Travell Dixon. But the talent and depth of Miami's eight-DB class is too strong to overlook. Al Golden was able to snag the country's top cornerback, Tracy Howard, on Signing Day, and safety Deon Bush should contribute right away. No matter what potential NCAA sanctions are on the horizon, the 'Canes are set in the defensive backfield. And that was a serious need in this recruiting cycle. Great job by Golden, tight ends coach/recruiting coordinator Brennan Carroll and the whole staff.

Any time a recruit gets labeled as an "Athlete," he brings a lot of versatility to a team. While most recruits have a preference of playing offense or defense, coaches will put their players in the best position to succeed. And Georgia head coach Mark Richt will likely use Josh Harvey-Clemons and Sheldon Dawson on the defensive side of the ball, where they should be able to thrive in coordinator Todd Grantham's 3-4 scheme. Harvey-Clemons has the talent to step in immediately and possibly become an all-conference linebacker by his sophomore season. The 5-11 Dawson, meanwhile, has the speed to be an effective defensive back.