With National Signing Day quickly approaching on February 1, let's take a look at the five best uncommitted prospects who have yet to make a decision on their future.

The nation's best wide receiver has reportedly narrowed his list of possible destinations to four schools: Arkansas, Oklahoma, Missouri and Texas. He has an unmatched blend of size, speed, hands and explosiveness, and he is scheduled to sign his letter of intent on National Signing Day at his high school. Because he is close to his family, many believe he won't choose a school too far away from his hometown of Springfield. In his final high school season, DGB caught 119 passes for 2,233 yards and 24 touchdowns. His 6,353 career receiving yards shattered the national record, and he was named USA Today National Player of the Year, Sporting News National Player of the Year, ESPN All-American, Gatorade All-American and U.S. Army All-American Player of the Year.

Where does he end up? Arkansas, though I wouldn't be shocked if Oklahoma was the selection. But he could have an immediate impact in Bobby Petrino's offense, especially with quarterback Tyler Wilson losing so many top weapons to graduation and the NFL. 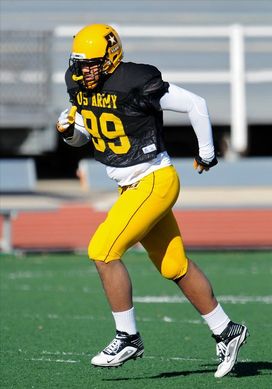 Arguably the top defensive lineman in this class, the two-sport standout is projected by some to be an ideal offensive lineman at the next level. However, he prefers to play defensive end, a position he played during the U.S. Army All-American Bowl. The Elk Grove, Calif., native left his high school basketball team specifically to enroll early at his school of choice, and he has narrowed his choice of college programs to Auburn, Cal, Oregon and Notre Dame. The 6-8, 280-pounder plans on starting classes immediately, and he has talked with his brother, Armond, about playing together. Of course, Armond Armstead played at USC for four years but sat out last season because of a medical issue. He will have one year of eligibility remaining.

Where does he end up? Notre Dame only because of the departure from Cal of defensive line coach and top recruiter Tosh Lupoi. And the Irish have a lot of momentum on the recruiting trail after landing Gunner Kiel.

The stud defensive tackle has narrowed his list to Alabama, Auburn, Florida State and Miami, and he has admitted that it will be difficult for his mom if he was to play football far from home in Washington, DC. However, the fact that Maryland is no longer in the running shows that family won't be an overwhelming factor in this decision. And while Goldman grew up rooting for the Hurricanes, will he be willing to enroll at a school that is still under NCAA investigation?

Where does he end up? Alabama's national title may have tipped the scale in the Crimson Tide's favor, but keep in mind that Sal Sunseri was Goldman's primary recruiter, and he left Alabama to become the defensive coordinator at Tennessee. I think Auburn would be a good landing spot for Goldman because the Tigers have a need at defensive tackle, so he could play early.

While Peat is considering Florida State, Stanford and USC, Nebraska seems to be the heavy favorite to land the star offensive tackle. His brother, defensive lineman Todd Peat, Jr., signed with Nebraska roughly a year ago, and high school teammate Avery Moss, a defensive end, will become a Cornhusker as well. Plus, Nebraska has been known to churn out offensive linemen.

Where does he end up? It'd be a complete shock if the choice wasn't Nebraska.

While Diggs is considering Cal, USC and Maryland, he said at the U.S. Army All-American Bowl that there were no leaders and that he’d like to see LSU, Auburn and Florida in January. He was set to receive an in-home visit from the Florida coaching staff, including new offensive coordinator Brent Pease, and he recently was impressed by the family atmosphere when he travelled to Auburn. He's still listed by some services as an "Athlete," but look for him to end up playing receiver.

Where does he end up? Florida needs some playmakers infused into that offense, but I think his visit to Auburn made a lasting impression. I'll roll the dice on Gene Chizik and the Tigers.