Trickett on the spot at FSU

With longtime starter EJ Manuel moving onto the NFL, Florida State is looking for a new quarterback to lead the offense in 2013. 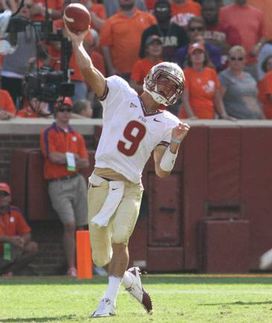 US PRESSWIREFourth-year junior Clint Trickett is the frontrunner for the starting QB job at FSU.

This spring, Clint Trickett is trying to hold off intriguing sophomore Jacob Coker and redshirt freshmen Jameis Winston and Sean Maguire for the No. 1 spot on the depth chart for the Seminoles.

The backup to Manuel the last two seasons, Trickett started two games in 2011 and showed promise in those contests, including a 24-of-38 passing performance for 336 yards and three touchdowns against one interception at Clemson in his first collegiate start. Unquestionably, the fourth-year junior is the frontrunner for the starting job in the fall after less than three weeks of spring ball because of the time spent in the system.

Thus far in camp, Trickett has generally made the right reads and exhibited sound decision-making and accuracy while also showing that he can successfully run the option and zone read. While the other signal-callers have different strengths and weaknesses, Trickett seems most comfortable with his skill set and how to utilize it. The son of offensive line coach Rick Trickett finally should get his chance to be the fulltime starter. However, Jimbo Fisher and his staff are well aware that there is talent behind Trickett if he struggles. And there is plenty of time left between now and the 2013 season opener.

If Trickett can establish himself as the clear-cut starter in Tallahassee, he will get to work behind a veteran offensive line with a nice assortment of talented running backs and receivers surrounding him.

Rising junior James Wilder Jr. is coming off of a breakout season in which he ran for 635 yards and scored 11 touchdowns on the ground. And the 6-2, 226-pounder also was a pass-catching threat out of the backfield as well, catching 19 passes for 136 yards and two more scores. He was fifth in the ACC in yards per carry while splitting carries, but he'll have a much bigger role in 2013 with Chris Thompson and Lonnie Pryor gone. Only the returning Devonta Freeman has significant experience in the backfield.

Speaking of experience, the 'Noles have plenty of it at receiver, which will only help the new starting signal-caller. FSU's veteran group of pass-catchers includes a deep corps of players who have been in the system for years, including Rashad Greene, Greg Dent, Willie Haulstead and Christian Green. Greene has been the team's leading receiver the last two seasons.

We'll get an up-close look at all of the quarterbacks in the team's spring game, which will be shown April 13 on ESPN3. But if Trickett can remain steady in practice and continue to develop rapport through preseason practice, he is well on his way to assuming the No. 1 job for Fisher and Co. in the season opener.