Proving that recruiting is truly a game, Stephon Tuitt has changed his mind once again.

Just a day after switching his commitment from Notre Dame and choosing to play in coordinator Al Groh’s defense at Georgia Tech, the Monroe Area High School (Ga.) defensive end recommited to the Fighting Irish, according to Irish Illustrated. 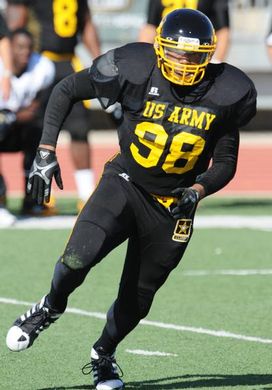 ICONA day later, Stephon Tuitt is headed to South Bend and not Atlanta.

Recruiting analysts at Rivals.com had just awarded Tuitt a fifth star on Tuesday, which meant that the 6-5, 260-pounder would have been the highest-touted recruit ever to come to Atlanta. High school teammate Demontevious Smith had also committed to the Yellow Jackets.

Instead, Notre Dame was able to add Tuitt, as the Irish staff continues its monthlong run of success on the recruiting trail. The Irish recently landed four-star defensive ends Ishaq Williams, Aaron Lynch and Anthony Rabasa to give the team much-needed pass-rushing depth. Further, Tuitt is considered the premier component of a potentially dominant future defensive line.

Williams and Lynch already are enrolled at Notre Dame. Now, will Tuitt remain in the fold come National Signing Day on Feb. 2?