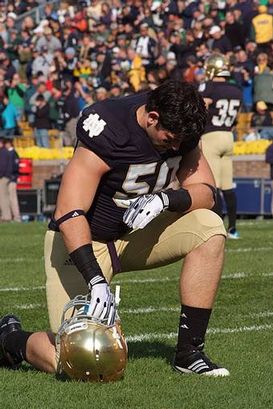 Chase Hounshell could be shelved again with another shoulder injury.

According to Keith Arnold of NBCSports.com, rising junior defensive end Chase Hounshell suffered another torn labrum, which is a brutal blow for a player that had a shoulder injury cost him the 2012 season. The 6-4, 275-pounder played in seven games as a freshman in 2011, when he recorded four tackles. And while Stephon Tuitt, Sheldon Day and Jarron Jones are slated to get meaningful reps at end in 2013, having a healthy Hounshell would make a strong unit even deeper.

In addition, running back Amir Carlisle reportedly suffered a broken collarbone after a collision. The redshirt sophomore, who battled an ankle injury and sat out the 2012 campaign after transferring from USC, had been expected to compete for plenty of time in the backfield with George Atkinson III, Cam McDaniel and William Mahone with Cierre Wood and Theo Riddick moving on. The only saving grace for the Fighting Irish is that the 5-10, 185-pound Carlisle will have a good deal of time to heal before summer camp opens.

Kelly isn’t scheduled to address the media until after Easter, so it could be a full week before we know any particulars about timetables on returns for both players.