Now that all of the practices are completed, it's time for the country's best high school prospects to enter the spotlight and compete at Tropicana Field in St. Petersburg, FL, in the Under Armour All-America game, which can be seen on Thursday at 4 p.m. ET on ESPN.

Here are some things to keep an eye on in this high school showcase event, which will feature next year's top college freshmen. 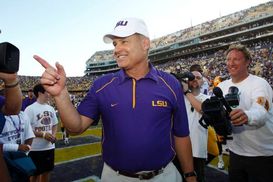 ICONLSU head coach Les Miles has a chance to put together a special Class of 2014.

LSU's epic day?: The Tigers have a chance to pick up verbal pledges from five of the Class of 2014's top recruits, all of whom are ranked as consensus five-star prospects by the various scouting services. That would arguably be the biggest commit day since recruiting has received such national attention, and it's something that has never happened at this showcase event before. Running back Leonard Fournette, receiver Speedy Noil, athlete/safety Jamal Adams, defensive lineman Gerald Willis and cornerback Tony Brown are all in the mix. The Tigers already have done a great job of getting commits from an incredible crop of Louisiana talent this cycle, and three of the aforementioned players are from the Bayou State. The other two are from the rich state of Texas. New Orleans native Fournette is the best offensive player in the nation, and fellow New Orleans native Noil is arguably the best receiver prospect in the country. The high school quarterback is electric with the ball in his hands. High school teammate Willis is a strong pass rusher who may be able to play anywhere across the defensive line. Meanwhile, Adams is one of the nation's best safeties and Brown's sister is on the track team at LSU. Head coach Les Miles and the Tigers are already flirting with a Top 10 class, but they could have a Top 3 or better if they land these top players on Thursday.

And then there's Alabama: The rich will always get richer, and Alabama head coach Nick Saban could land even more gems when cornerback Jalen Tabor of Washington, D.C., and Florida receiver Travis Rudolph make their pledges. Maryland no longer appears in the running for Tabor, as Alabama and Arizona are the leaders. Because of the Tide's need for elite cornerbacks, Tabor to Tuscaloosa makes a lot of sense. Rudolph, meanwhile, was considered a Florida State lean but is considered to be high on the Tide.

Urban's guys: Ohio State has two commits playing in this game: offensive lineman Jamarco Jones and linebacker Raekwon McMillan. McMillan is expected to begin classes in Columbus in just a few days as an early enrollee, and he will be the gem of the Buckeyes' 2014 haul. Meyer is also hoping that cornerback Tony Brown, who was mentioned above, and cornerback Jermaine Roberts, who is a soft verbal to Texas, ultimately become Buckeyes. Roberts is expected to take an official visit to Columbus later this month.

Other names to watch

— Malachi Dupre was the top player on 2012 national champion John Curtis Christian. Because of his leaping ability, he can be an immediate red-zone weapon. Power programs such as Alabama, Texas A&M, LSU and Florida State are all in the mix for his pledge.

— Adoree' Jackson does not have great size, but the Southern California product could find himself lined up anywhere on offense or at cornerback. USC and Florida are leading the pack, but UCLA and Oregon remain in the mix as well.

— Lorenzo Carter is a Georgia pass rusher who should immediately step in at defensive end on the next level. He is being pursued by the top programs as well, but Georgia, LSU and Florida are considered the leaders.

— Damian Prince projects to be a left tackle at the next level and is one of the best at the position in the Class of 2014. Will he stay in-state and give Maryland head coach Randy Edsall an elite player?