College football fans are certainly aware of the sport's big-name stars such as Texas A&M's Johnny Manziel, South Carolina's Jadeveon Clowney and USC's Marqise Lee. But there are a lot of other standout players that tend to go overlooked.

Here are some under-the-radar stars that don't nearly get enough publicity for their strong play. 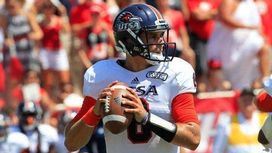 QB Eric Soza, Texas-San Antonio: The Roadrunners successfully transitioned from the FCS to FBS, and a lot of the strong play came from the quarterback position, where the 6-foot, 205-pound Soza threw 20 touchdowns against just three interceptions — including a stretch where he didn't throw a pick for 256 straight passes. The dual-threat, who had four games of at least 50 yards rushing, helped UTSA get to eight wins in its debut FBS season. The senior could be in store for a real good 2013 campaign after he was hampered by a midseason hip injury that kept him out of two games last year.

DE Scott Crichton, Oregon State: There's no question that college football fans on the West Coast and in Pac-12 territory are familiar with Crichton's game after he earned all-Pac 12 honors in 2012 with nine sacks and 17.5 tackles for a loss. But I think the Beavers defensive end goes overlooked a bit nationally. He is a pass-rushing machine who also is adept at stopping the run. He missed spring drills after shoulder surgery, but he is expected to be back at 100 percent for the start of the season.

RB Jordan Parker, Middle Tennessee: The Blue Raiders probably would have preferred to redshirt Parker last season, but he was needed because Benny Cunningham was lost to a season-ending injury midway through the year. The 6-1, 207-pounder stepped in and set a program freshman record for rushing yards in a season with 851 yards. Parker enters 2013 as the No. 1 back and will be rushing behind an offensive line that returns four starters.

WR Alex Neutz, Buffalo: The Bulls had one of the worst offenses in the FBS last year, ranking 99th in the nation in total offense. But the 6-3, 205-pound Neutz was one of the bright spots, especially towards the end of the year when Joe Licata entered at quarterback. Neutz had 11 touchdowns and over 1,000 yards receiving on 65 catches and will get Licata back as his QB this fall. With Branden Oliver in the backfield, this offense could be much better and Neutz could produce even better numbers. Buffalo opens at Ohio State, so Neutz will be in the spotlight.

S Sam Carter, TCU: There's no question that Horned Frogs cornerback Jason Verrett will be a high NFL Draft pick, but Carter should not go overlooked in Gary Patterson's defense. The strong safety had a very good sophomore campaign last fall, recording 63 tackles (6.5 for loss), 13 passes defended, three sacks, three interceptions and a forced fumble. The TCU secondary is one of the best in America, but Carter seems to get overlooked too often.

WR Willie Snead, Ball State: The Cardinals receiver is quarterback Keith Wenning's top target after amassing 89 catches for over 1,100 yards and nine touchdowns in 2012. The 5-11, 193-pound Florida product had a memorable 216-yard, two-score performance in a close loss to Kent State, and he is part of a Ball State offense that features a lot of weapons. Snead can be an asset both on the outside and in the slot, so expect another productive fall this year.

WR Justin Hardy, East Carolina: The former highly regarded high school quarterback has made the transition to wide receiver very smoothly, racking up very good numbers in two seasons as a pass-catcher for the Pirates. Last season the 6-1, 186-pounder racked up 1,105 yards and 11 touchdowns on 88 catches, including a 16-catch, 171-yard effort in the regular-season finale. Quarterback Shane Carden is back, so he will be looking for Hardy early and often.