While PSU didn't get the infamous Death Penalty, the sanctions come awfully close to it. Here are the penalties: 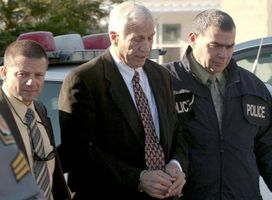 Penn State will suffer greatly for the Jerry Sandusky cover-up.

• a $60 million fine over five years. The funds will go to child-abuse programs. Per the NCAA, that dollar amount “cannot come at the expense of non-revenue sports or student-athlete scholarships.”

• a four-year postseason ban. The Nittany Lions will not be able to go bowling for four consecutive seasons.

• every win from 1998-2011 will be vacated (111 victories). Thus, Joe Paterno is no longer major college football’s winningest head coach. He now ranks seventh among all D-1 coaches in wins.

• the NCAA can investigate the program further after criminal proceedings. The NCAA will also create various oversight positions.

• Penn State players can transfer wherever they want without penalty. And the NCAA is considering waiving the scholarship limit for schools that accept the transfers.

• a redistribution of Penn State's Big Ten bowl revenue for the four-year period to children's charities. That figure will come out to be roughly $13 million.

• Commissioner Jim Delany also said that the Big Ten is unlikely to prevent Penn State players from leaving for other Big Ten schools.

Certainly, these penalties are not what first-year head coach Bill O'Brien had in mind when he left the NFL's New England Patriots.

Here is the NCAA's press release:

By perpetuating a “football first” culture that ultimately enabled serial child sexual abuse to occur, The Pennsylvania State University leadership failed to value and uphold institutional integrity, resulting in a breach of the NCAA Constitution and rules. The NCAA Division I Board of Directors and NCAA Executive Committee directed Association president Mark Emmert to examine the circumstances and determine appropriate action in consultation with these presidential bodies.

“As we evaluated the situation, the victims affected by Jerry Sandusky and the efforts by many to conceal his crimes informed our actions,” said Emmert. “At our core, we are educators. Penn State leadership lost sight of that.”

As a result, the NCAA imposed a $60 million sanction on the university, which is equivalent to the average gross annual revenue of the football program. These funds must be paid into an endowment for external programs preventing child sexual abuse or assisting victims and may not be used to fund such programs at the university.

The sanctions also include a four-year football postseason ban and a vacation of all wins from 1998 through 2011. The career record of former head football coach Joe Paterno will reflect these vacated records. Penn State must also reduce 10 initial and 20 total scholarships each year for a four-year period. In addition, the NCAA reserves the right to impose additional sanctions on involved individuals at the conclusion of any criminal proceedings.

To further integrate the athletics department into the university, Penn State will be required to enter into an “Athletics Integrity Agreement” with the NCAA. It also must adopt all Freeh Report recommendations and appoint an independent, NCAA-selected Athletics Integrity Monitor, who will oversee compliance with the agreement.

Effective immediately, the university faces five years of probation. Specifically, the university is subject to more severe penalties if it does not adhere to these requirements or violates NCAA rules in any sport during this time period.

“There has been much speculation on whether or not the NCAA has the authority to impose any type of penalty related to Penn State,” said Ed Ray, Executive Committee chair and Oregon State president. “This egregious behavior not only goes against our rules and Constitution, but also against our values.”

Because Penn State accepted the Freeh Report factual findings, which the university itself commissioned, the NCAA determined traditional investigative proceedings would be redundant and unnecessary.

“We cannot look to NCAA history to determine how to handle circumstances so disturbing, shocking and disappointing,” said Emmert. “As the individuals charged with governing college sports, we have a responsibility to act. These events should serve as a call to every single school and athletics department to take an honest look at its campus environment and eradicate the ‘sports are king’ mindset that can so dramatically cloud the judgment of educators.”

Penn State fully cooperated with the NCAA on this examination of the issues and took decisive action in removing individuals in leadership who were culpable.

“The actions already taken by the new Penn State Board of Trustees chair Karen Peetz and Penn State president Rodney Erickson have demonstrated a strong desire and determination to take the steps necessary for Penn State to right these severe wrongs,” said Emmert.