Florida’s Urban Meyer has stepped down from his position of head coach for the second year in a row. Only this time, it looks permanent. 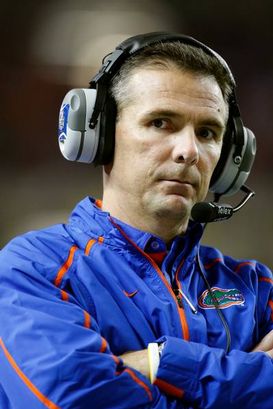 ICONThe Urban Meyer era is over at Florida.

The 46-year-old leader of the Gators football team informed athletic director Jeremy Foley over the weekend that he was thinking about resigning, and the two ultimately finalized the plan Tuesday. Meyer told the team of his decision during a meeting earlier this afternoon, and Florida has scheduled a press conference for 6 p.m. at Ben Hill Griffin Stadium where Meyer and Foley will address the media.

Meyer will remain Florida’s head coach through the Outback Bowl in Tampa on New Year’s Day.

Florida finished 7-5 this season and 4-4 in the SEC while struggling much of the season to find an identity on offense. Coordinator Steve Addazio came under fire throughout the season for the team's inability to consistently move the ball. Rumors swirled since the end of the season that Meyer would make a move at the OC position, perhaps even bringing in Dana Holgorsen from Oklahoma State. Holgorsen, of course, ran the Cowboys' prolific offense this season under Mike Gundy. With the news of Meyer's resignation, however, Holgorsen could become a name linked to the head coaching position.

Mississippi State's Dan Mullen, who is reportedly the top name on the Miami wish list, also would likely be high on the Gators' list after overseeing the offense in Gainesville during the height of the Tim Tebow era.

Meyer departs Gainesville as the nation’s winningest active coach with 10 seasons or more following a six-year stretch unseen in the 105-year history of Gators football. He led the Gators to two national championships, three SEC East crowns, and he has a 64-15 record entering the Outback Bowl matchup against Penn State. The Gators won a school-record 22 consecutive games during Meyer’s tenure and went 16-2 against traditional rivals Tennessee, Georgia and Florida State.