With current and former NFL players questioning the toughness of Chicago Bears quarterback Jay Cutler, who left Sunday's NFC Championship Game against the Green Bay Packers in the third quarter with an injured knee, teammate Brian Urlacher defended the signal-caller after the Packers' 21-14 victory. 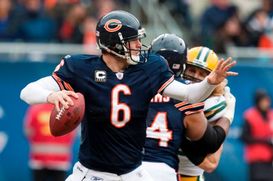 ICONJay Cutler left during the third quarter of Sunday's loss with a knee injury.

Urlacher was notified that some players around the league were questioning Cutler, particularly on Twitter.

Bears head coach Lovie Smith stressed in his postgame press conference that Cutler's departure was a team medical decision and that the former Denver Bronco could not play.