The 2012 U.S. Army All-American Bowl was played on Saturday in San Antonio, and Cal landed three of the top prospects nationally in the Class of 2012.

Let's take a look at the destinations of the 14 prospects who announced their college intentions at the game.

S Shaq Thompson, Grant (Calif.): Thompson showed in front of a large crowd on Saturday exactly why Golden Bears fans are ecstatic that he is on his way to Berkeley. He has very good size and speed, and he should be able to make an instant impact for a Cal secondary that will be seeing a potent offense nearly every week in the Pac-12. Thompson, who also played running back and quarterback in high school, originally committed to Cal in the spring but opted to open up the process and took official visits to Arizona State, Notre Dame, Oregon and Washington. USC was also in the mix for his commitment.

DT Ellis McCarthy, Monrovia (Calif.): The Golden Bears have become an NFL machine when it comes to talented defensive linemen getting drafted early, and the 6-5, 315-pound McCarthy hopes to follow that same path after his time in college is done. He's a versatile lineman who could eventually see time at strongside end in Clancy Pendergast's 3-4 scheme.

WR Jordan Payton, Oaks Christian (Calif.): Payton has good size at 6-2 and 200 pounds, and he's able to make tough catches and take contact well. He has good hands and should be able to see the field early in 2012. 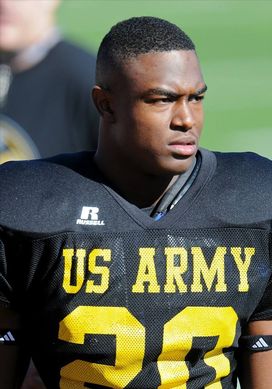 ICONLanding Tyriq McCord was a big "get" for Miami head coach Al Golden.

DE Tyriq McCord, Jefferson (Fla.): Landing McCord was huge for the Hurricanes, especially in light of the NCAA investigation being done in Coral Gables. He is a strong pass rusher off the edge who has room to add bulk to his 6-3, 220-pound frame. He should see time at weakside defensive end sooner than later because of his quick first step and the fact that the Hurricanes will lose a lot on defense to graduation and the NFL Draft.

S Deon Bush, Columbus (Fla.): With many people believing he was headed to Auburn, Bush decided to pledge to the Hurricanes. The 6-1, 180-pounder has very good quickness and is one of the top safeties in the nation. His 4.4 speed in the 40 will get him on the field early.

RB Barry J. Sanders, Heritage Hall (Okla.): Like his father, the Hall of Famer by the same name, Sanders isn't the biggest running back at 5-10 and 190 pounds. But he is one of the most dangerous runners when he gets out into space. He is also very valuable out of the backfield in the passing game, which is a weapon that college coaches love to have with their backs. His overall combination of speed, power and elusiveness will be greatly appreciated on The Farm in Stanford's pro-style offense.

S Elijah Shumate, Don Bosco Prep (N.J.): The Irish need help in the secondary, and the 6-1, 205-pounder is a big gain for the team. But Shumate could also get a long, hard look at running back in South Bend or even at outside linebacker for Bob Diaco's defense. His commitment is even bigger if cornerback prospect Ronald Darby elects to bypass Notre Dame after decommitting on Sunday.

CB Kevon Seymour, John Muir (Texas): Seymour is a big snag for the Trojans, who will finally start to feel the pain of NCAA sanctions this recruiting period. The 6-foot, 175-pound cornerback has good quickness and ball-hawking skills. Seymour is the 12th commitment for the Trojans in this class, but he is the eighth who will count against the 15-player limit of 2012 because four players enrolled early and were backdated into the 2011 signing class. 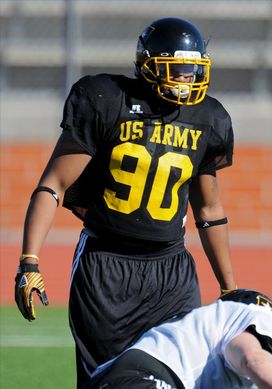 ICONJonathan Bullard hopes to make an instant impact at Florida.

DE Jonathan Bullard, Crest (N.C.): Bullard had one of the best games of any defender in Saturday's game, displaying his ideal blend of quickness and power. The 6-4, 255-pounder should see the field in Gainesville early in the Gators' 3-4 scheme after also considering Clemson and South Carolina.

LB Keith Brown, Norland (Fla.): Charlie Strong had one heck of a day as he continues to build the Cardinals into a Big East power. The 6-2, 230-pound Brown is a very good athlete who hits hard and moves well east to west. He previously had committed both to Miami and Illinois.

LB Nick Dawson, Phillip O. Berry (N.C.): Dawson should pair with Brown to give the Cardinals a strong linebacker corps for years to come. His strength is stopping the run, and the 6-3, 230-pounder could man the middle for many years.

LB Brian Nance, Trinity (Texas): The Bears landed on the national stage this season behind the play of Heisman Trophy-winning quarterback Robert Griffin III, and the momentum continued by picking up Nance, an instinctual outside linebacker. The 6-3, 210-pounder could see immediate playing time after choosing the Bears over Arkansas.

S Jordan Diggs, Island Coast (Fla.): Diggs is such a nice "get" because he may be able to fill that hybrid safety/linebacker "Spur" position that is so prominent on the Gamecocks' defense. Diggs is the second big defensive back commit for South Carolina in the last week, joining Chaz Elder, who chose the program during the Under Armour All-America Game.

QB Anthony Alford, Petal (Miss.): The 6-foot, 200-pound dual-threat quarterback is headed to Hattiesburg to play for new head coach Ellis Johnson. Alford has a good arm and moves well, so he could be the next Austin Davis at Southern Miss. But will he even play football? He will likely be a high draft choice in the 2012 MLB draft.